Off the charts animatronics with Offish!

This article has been almost a year in the making. I got in touch with Prasun Basu, co founder Offish early 2020 and finally got him to take some time off his busy schedule to get this interview going. Prasun took my 3D animation course at NID, Ahmedabad. A senior, a man with similar yet vastly diverse interests! In this article we read about the amazing animatronics work he, Gauri and team Offish have been upto!

AG: Tell us about your self, your background and what got you into doing what you do today?
PB: I have always been a naughty kid, a certified trouble maker and a usual suspect at every school college institute I have ever been to.
As a Kid I enjoyed breaking apart my toys more than playing with them...now there weren't much fancy stuff going on inside a spring powered toy as compared to fancy toys of today but still they fascinated me no end. This along with my other misadventures made me an ideal candidate for boarding school. My school, Ramakrishna Mission Vidyapith, Purulia, is known for its impeccable academic track record. Techies, professors scientists and academicians to MBBS, MD, DMs of all sorts of human organs ;), abound the whatsapp group of our Class of 93....I was a proud backbencher of that class all through my school life, doodling away cartoons and caricatures of our teachers instead of taking notes. Thankfully the school also had a beautiful campus. The buildings and facades were designed by, Sunil Pal, a renowned sculptor. Many of the interior walls adorned with paintings and murals by Ramananda Bandopadhyay, a student of Nandalal Bose and an important artist of the Bengal school of Art. I guess, the lack of breakable toys in a boarding school scenario coupled with this beautiful surrounding eventually channelised my toy breaking skills and energies towards something more constructive like drawing and painting.
As I started getting a hang of drawing I wanted to make my drawings come alive through animation. 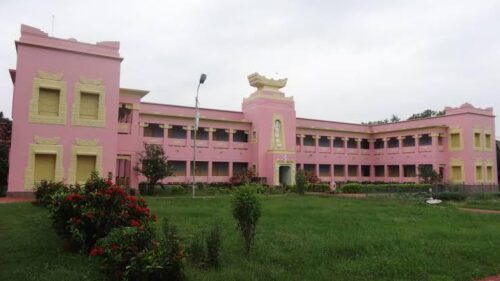 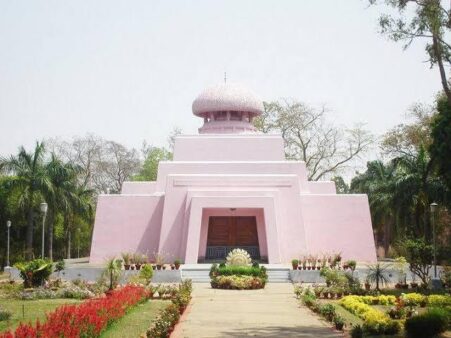 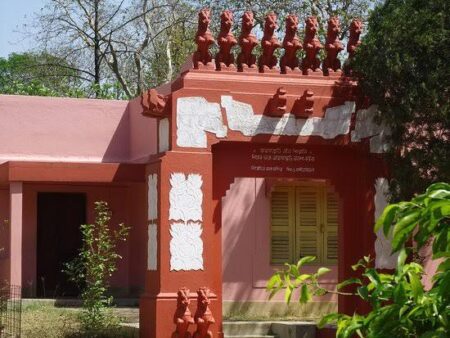 After 10+2, I enrolled for BSc, dropped out to persue BFA, Dropped out again to join NID to study Animation Film Design. But by the time we came out of NID, Animation had started growing out of the traditional light boxes and 2B pencils and was getting into another sophisticated lightbox. Tried my hand in it, but didn’t quite enjoy pushing a mouse all day long ...
I always enjoyed drawing for films, staging a scene and visually narrating a story at a gig as a storyboard artist on a featurefilm...It was Pan Nalin’s ‘Valley of Flowers’...I was on location in Ladakh for about a week and I was just blown away by the scale of operation and the collaborative inter disciplinary nature of Cinema. It was the Art dept. That attracted me the most. Concept design, visualisation, Making things with your hands, handling materials, thinking on your feet and of course travelling to exotic locations....
It took me another another 6-7 yrs to make that switch from animation to production design. As i started doing production design for TVCs every once in a while there would be requirements for some special prop, mask, special costume but there was no specialised vendor for such stuff. The only option would be to get it from abroad...
Whenever there would be such requirements, I’d grab the opportunity. The set design part of production Design for TVCs was getting repetitive and I would look forward to projects that had some ‘adha tedha’ stuff to be made.
Here are some of my early masks and costumes. I had no clue about the right way of doing it but with each job learnt a new technique, or explored a new material. 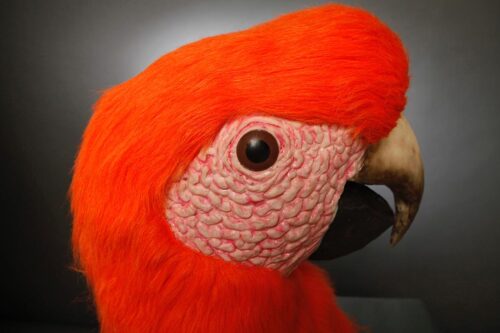 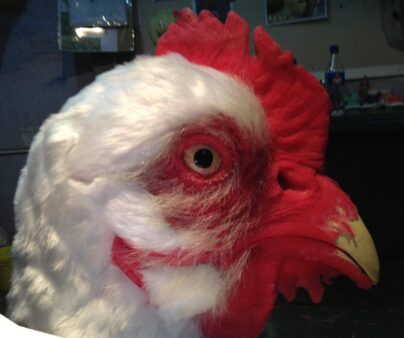 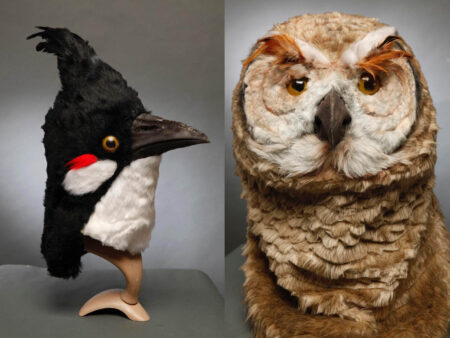 Then I got an opportunity to design the sets for a fantasy TV series. The story had lots of creatures and characters and the producer wanted to do most of it in CG. I managed to convince him to try out creature suits and prosthetics. 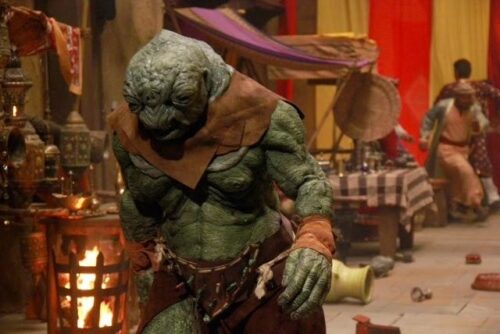 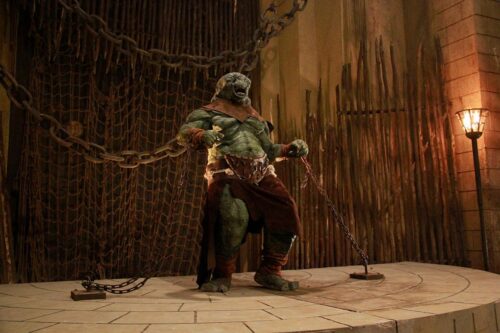 I designed and built the sets but i was more interested in the creature part...our practical creatures took a lot of load off VFX and CG and the episodes featuring the practical creatures also saw a spike in the TRP..Our early costumes were torturous on the actors but we had a blast working with our hands and exploring materials....
We eventually set up a studio focussed on Character Arts, Weta workshop, Jim Hensons, Stan Winston, Studio ADI are our inspiration... 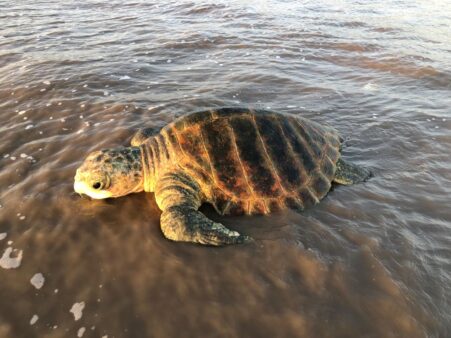 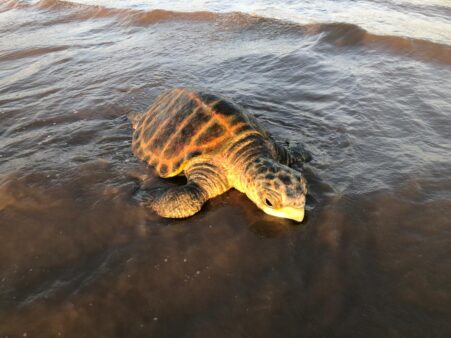 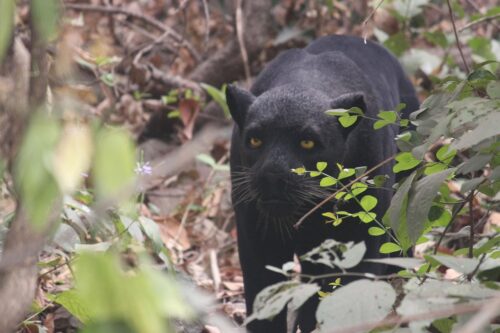 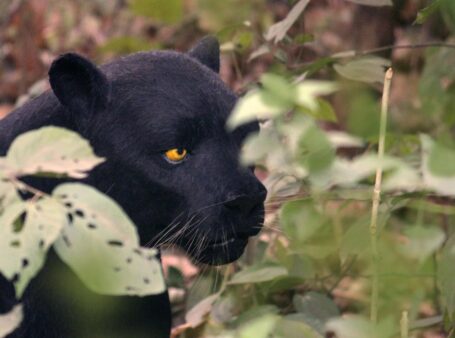 The quest to crack animatronics took us on an exhilarating ride....animatronics is a mix of electronics, robotics, mechanics, RC hobby, sculpting, rigging, puppetry, prosthetics, performance, animation and above all ‘Jugaad’. I had to brush up on my physics to understand mechanical leverage and gear systems. From pencil, wire tools and stylus, I had to switch to a whole new set of tools like soldering iron, dremel and bench drill. I knew my 3D max and Maya, but modelling custom machine parts for 3D printing or CNC needed a different CAD platform like solidworks and Fusion 360.. Thanks to our multidisciplinary exposure at NID we are not intimidated by new tools or techniques but NID is also the best ‘Matrimonial college’ 😜. It almost ensures, no one steps out in the big bad world all alone. My partner in life and crime, Gauri, who is a Film and Video grad, pitched in by picking up solid modelling in Fusion 360 and solidworks and started designing and 3D printing the custom mechanical parts. 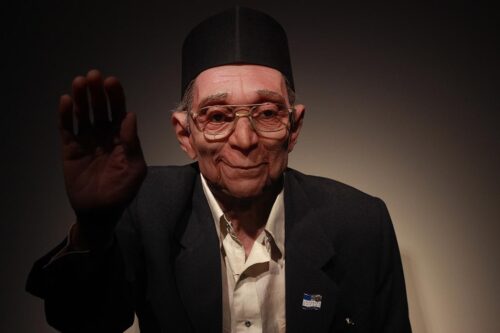 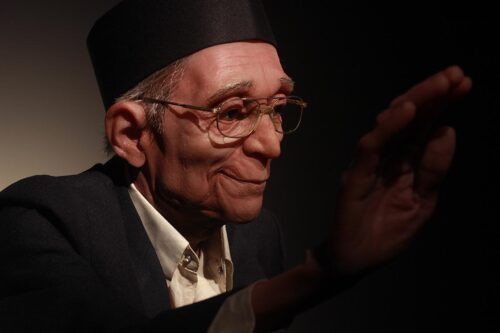 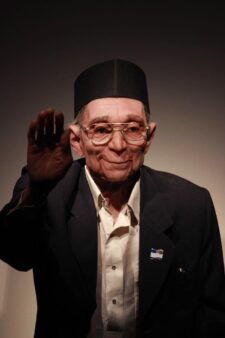 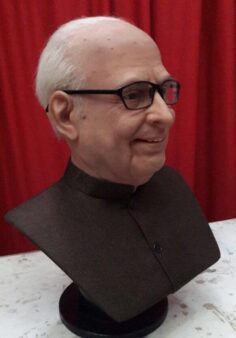 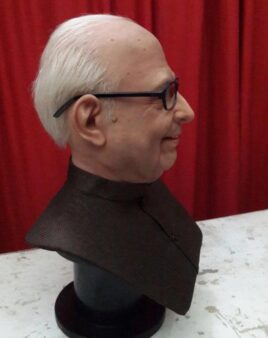 Finally my toy breaking skills came in handy in kitbashing.
I also got to know every bye lane from Lamington to Lohar chawl like the back of my hand. One can get just about anything in this part of town as long as one knows the local name for it.
Explored more gooey smelly stuff like silicon, urethane, epoxy and foam latex (the smelliest and the most temperamental of all materials) And finally we made our first fully animatronic, lip syncing gorilla costume. 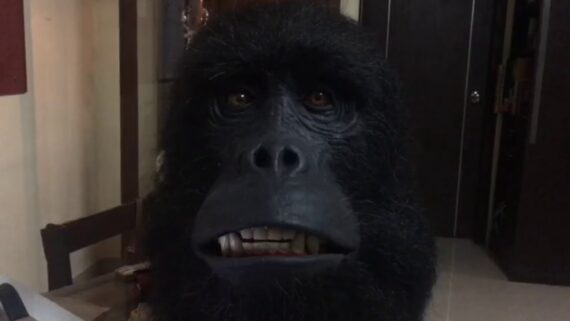 we had lots of plans to create content around it but we realised we were in a desperate situation financially, we were defaulting on salaries and the studio rent…to spend more time at the studio we had stopped taking production design jobs for TVCs. We would only take up jobs that could be done from the studio.we did some interesting work for museums, exhibitions and experiance centres during this phase, but they were not enough to sustain our team and our R&D
We realised, our own animatronic gorilla character will take a long time to be able to generate revenue on its own. rather it would need further investment to develop and produce such content. We needed to build a character/product that will have an immediate market.
we went back to our basic design training of identifying a problem that needed design intervention….That’s how the idea of making an animatronic horse first came up…remembered how tough it was to shoot dialogue and action scenes with horses in Valley of Flowers.. No matter how trained the horses are, there are several retakes. For battle scenes its always a nightmare. As the camera tries to track a lead character there are many more horses in the frame….if the hero horse overshoots the mark or anything else goes wrong, it takes a long time resetting such shots as all the horses have to return to position before they can start rolling again. For mids and closes where a lead actor has to perform, they tend to get distracted (if not scared), handling the horse while delivering a line and also doing action. There’s been attempts at making mechanical horse rigs but they were very crude…from the look to motion to the surface finish nothing was really camera worthy. It was probably just waiting for an animator who had hand drawn a horse gallop cycle frame by frame, to crack the code.
Around that time british action director Nick Powell was in town for Manikarnika. Nick was the stunt coordinator on ‘Last Samurai' and he had used mechanical horses for some complex action scenes with Tom Cruise in that film. He wanted a mechanical horse rig for Manikarnika. These horses are never a replacement for real horses but opens up a lot of possibilities for action choreography without putting the actor or the animal at risk. He went to Hydrabad to check out the horse rig used in Bahubali, but did not like it at all.
By then we had worked out our mechanism on the computer it but did not have the funds to make a life size one. Through the Production Designer of tht film, we approached Nick and presented our plan. We literally used our gorilla to make the sales pitch...he at least understood we are serious about animatronics and we understand the subtle nuances of movement. He was convinced that we could pull it off and got us on board for the film. 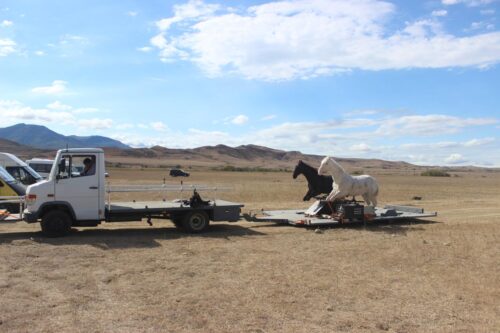 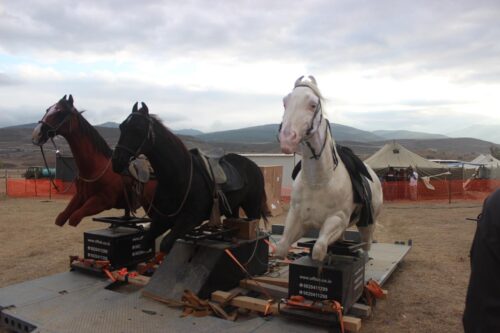 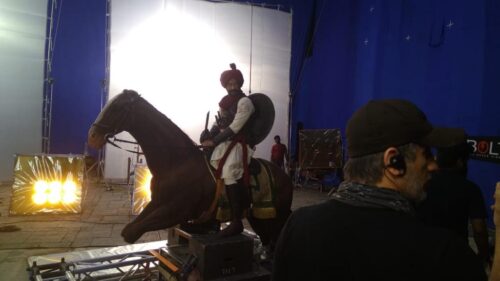 That’s how we made our first commercial animatronic product and now we have6 animatronic horses in our stable 😉 plus a falling horse, and a prancing horse rig. Since Manikarnika, our horses have worked on all major period films in Hindi as well as Tamil, Telegu and malayali. With the content boom thanks to OTT platforms we are now getting enquiries from around the world. We had to make it modular to fit into flight cases to transport it to foreign locations.
With each new horse we made, we kept fine tuning the rig, improving the skin and surface finish, enhancing the movement. Here’s the current version of our animatronic horse. 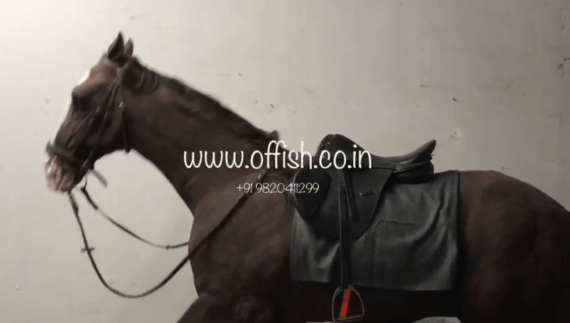 We also made a life size elephant and recently we made an animatronic Lion for a period film by YRF starring Akshay Kumar and Sonu Sood. The film extensively used our horses as well. 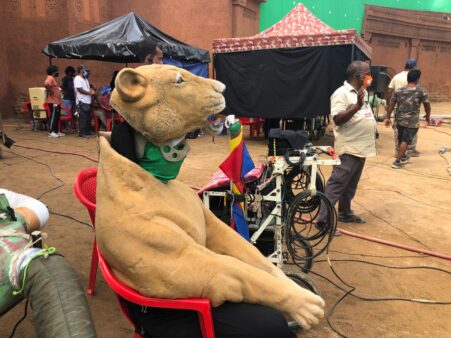 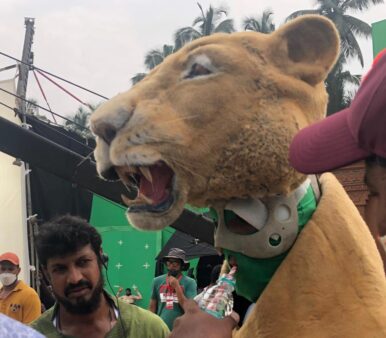 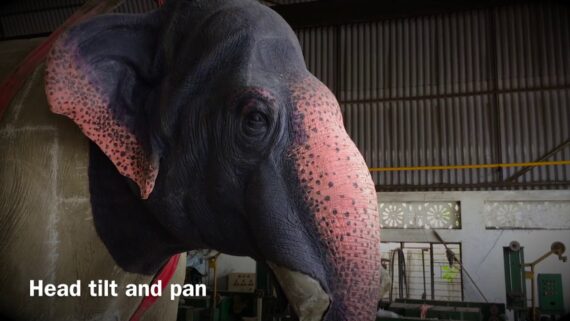 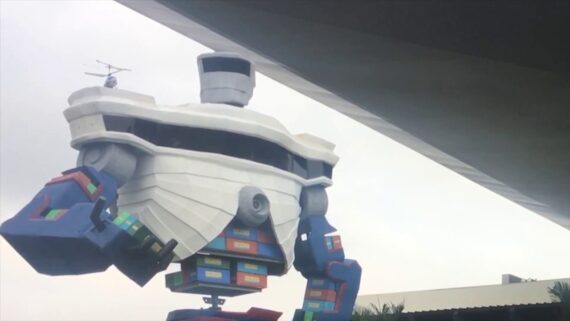 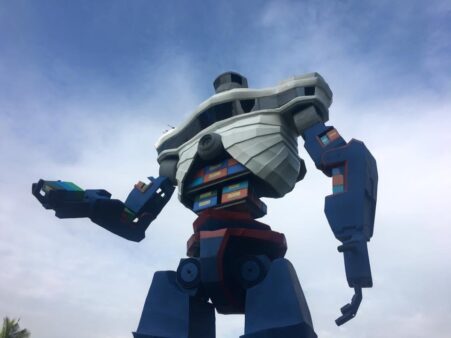 AG: Parting thoughts...
PB: There are such brilliant creators in this group pushing the boundaries of form and content. We’ll be most happy to collaborate, if someone’s interested to experiment with this form or help our characters get over with their stage fright.
I’m glad that Prateek made me part of AGI only on the basis of the prefix of my specialisation...the suffix has changed from ‘tion’ to ‘tronics’ over the last few years but at heart I’m still an animator…
AG: Dear readers, As Prasun mentioned, If you have interest in the work that Offish have been upto or wish to collaborate, get in touch with them on the details below. You can also head to their website and see the fantastic vast array of work ranging from Museums to Feature films! We wish Prasun, Gauri and team Offish the very best and will be on a lookout for their amazing work! 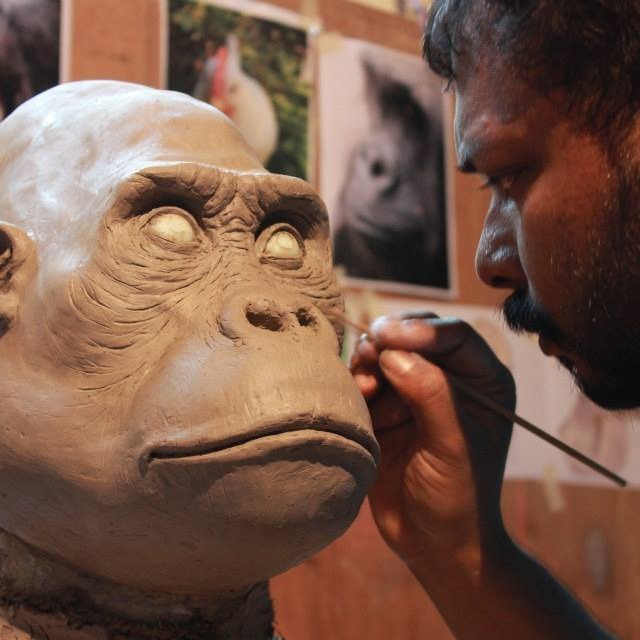