Brown Paperbag is a slice of life webcomic by Mumbaikar cartoonist Sailesh Gopalan that began in June 2016. It consists of gag-a-day pages that draw from mundane situations within a stereotypical Indian family. The webcomic often focuses on two angsty teenagers, Kabir and Ananya, who frequently have to deal with their overprotective and intrusive parents. Let's talk to the creator Sailesh Gopalan.

Hi Sailesh, most of our readers may already know you, but can you still give us an introduction about yourself & your creative journey so far? Also share one thing that most of us don't know about you?
Hello! I’m Sailesh Gopalan, more commonly known as “Saigo”. I am the creator of Brown Paperbag Comics, a webcomic series showcasing comedy and irony in the general Indian life. I began this journey back in June 2016, where I unexpectedly hit social media virality within a day of launching my webcomic and, well, I’ve kept it going since then.
Something a lot of people don’t know about me is that I’m an avid 'manga' reader and have read several hundred series, currently following around 50 ongoing series. 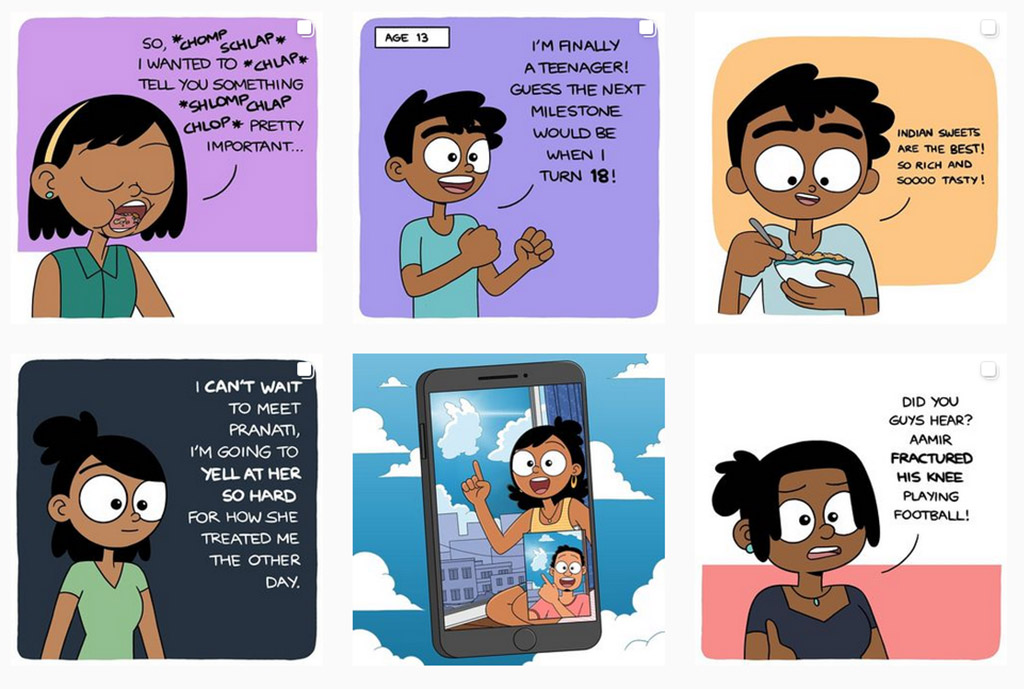 https://www.instagram.com/brownpaperbagcomics/
Let's start with the most obvious question: why the name 'Brown Paperbag'?
Over the years I’ve been asked this question repeatedly, and at some point I started making up a reason that went along the lines of “Brown is a colour associated with Indians, and old cartoons had a gimmick where a character would wear a brown paper bag over their heads to symbolise shame and embarrassment, two topics I touch upon quite frequently”.
The real reason is that I thought it sounded cool.

How did you start about creating these comics? Did you plan ahead for topics and for any social media promotion?
I was in the middle of a summer internship with a game design studio when I got so saturated with the work that I wanted to try something new. I’d drawn tons of comic ‘books’ throughout my childhood, but I’d never tried making a comic ‘strip’ or a ‘webcomic' before. So, I figured let’s give it a shot! College was set to resume in a week and I was notorious for starting a new project and discarding it almost immediately after sharing it, and in my mind, that’s what Brown Paperbag was going to be. Little did I know it’d be so well received, to the point that it gave me the motivation to keep it running. 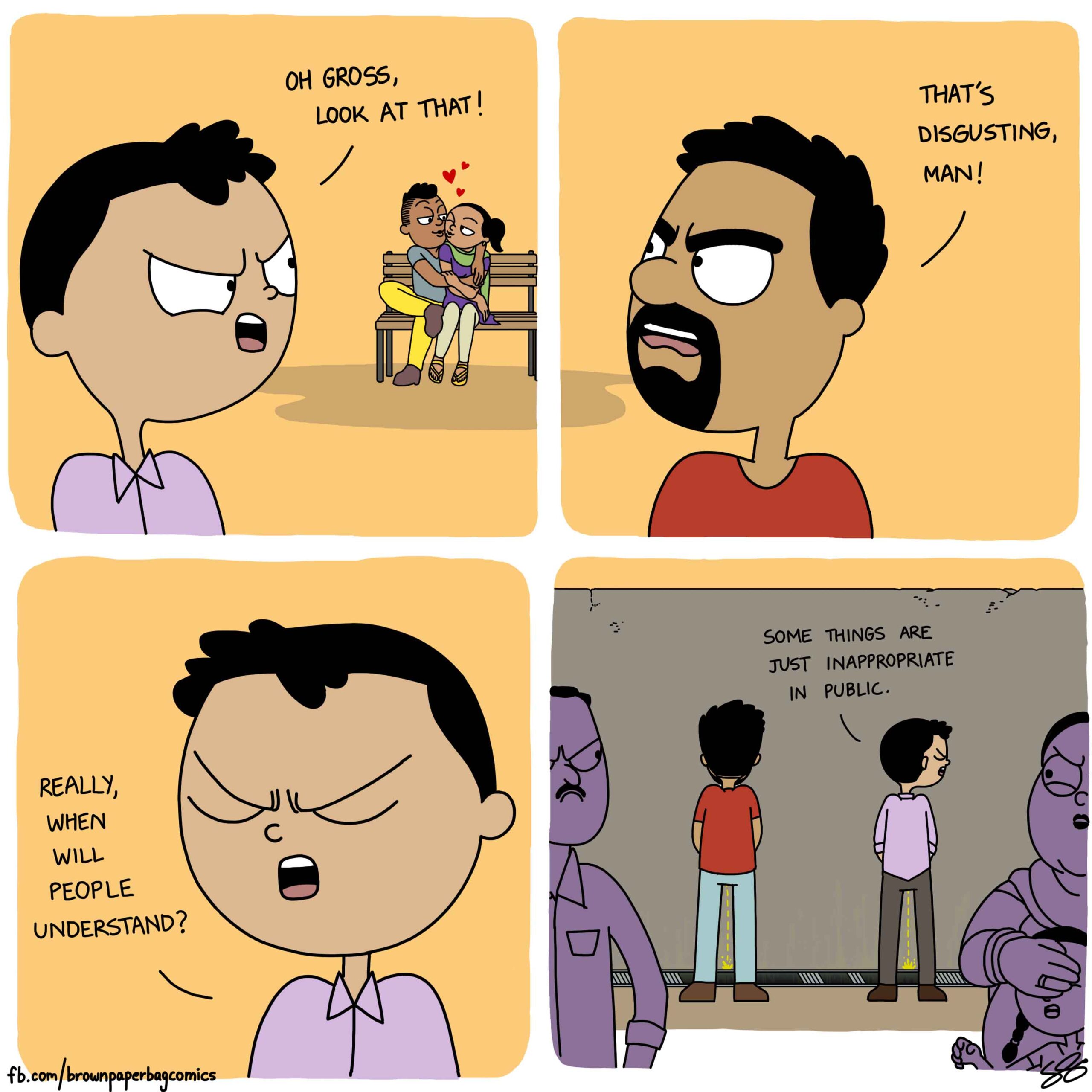 How much time do you spend on each comic panel? And what tools /softwares do you use?
I can’t quantify the time it takes to come up with an idea, it’s usually an instant observation or realisation. The drawing process takes me anywhere from an hour-and-a-half to three hours. I used to draw entirely on Adobe Photoshop, but now I use Procreate on the iPad Pro before transferring it to Photoshop for editing and layouting. 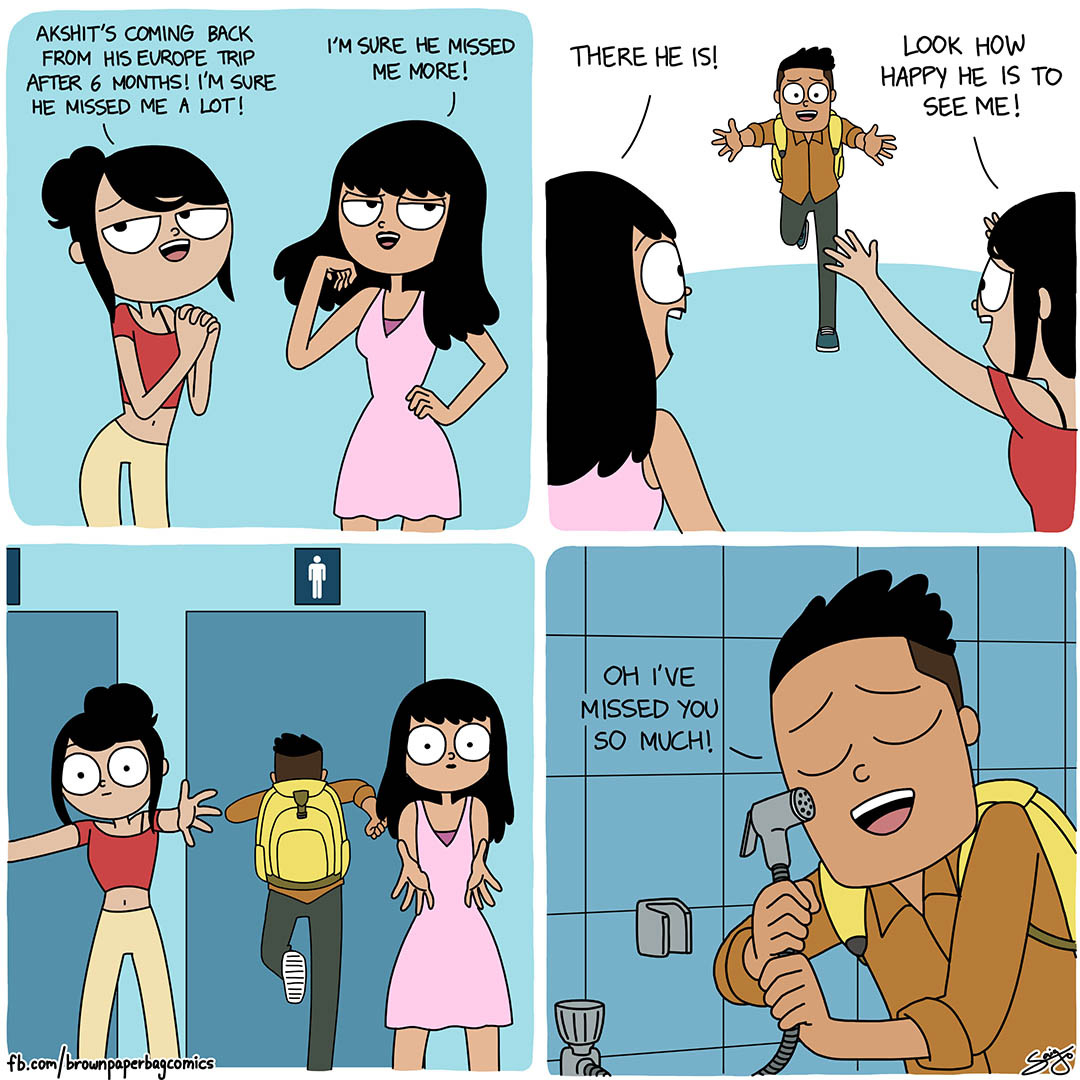 You seem to be quite talented with creating ‘puns’? Do you maintain a notebook / journal? Where do all these bright & ‘punny’ ideas hit you?
I wish! I’ve never cultivated the habit of ‘writing down’ ideas, so I don’t have any sort of a repository of puns. I’ve always loved puns, especially since I started reading Pearls Before Swine by Stephan Pastis in the newspaper as a child. There’s something just so fascinating about identifying some relation between similar sounding words. 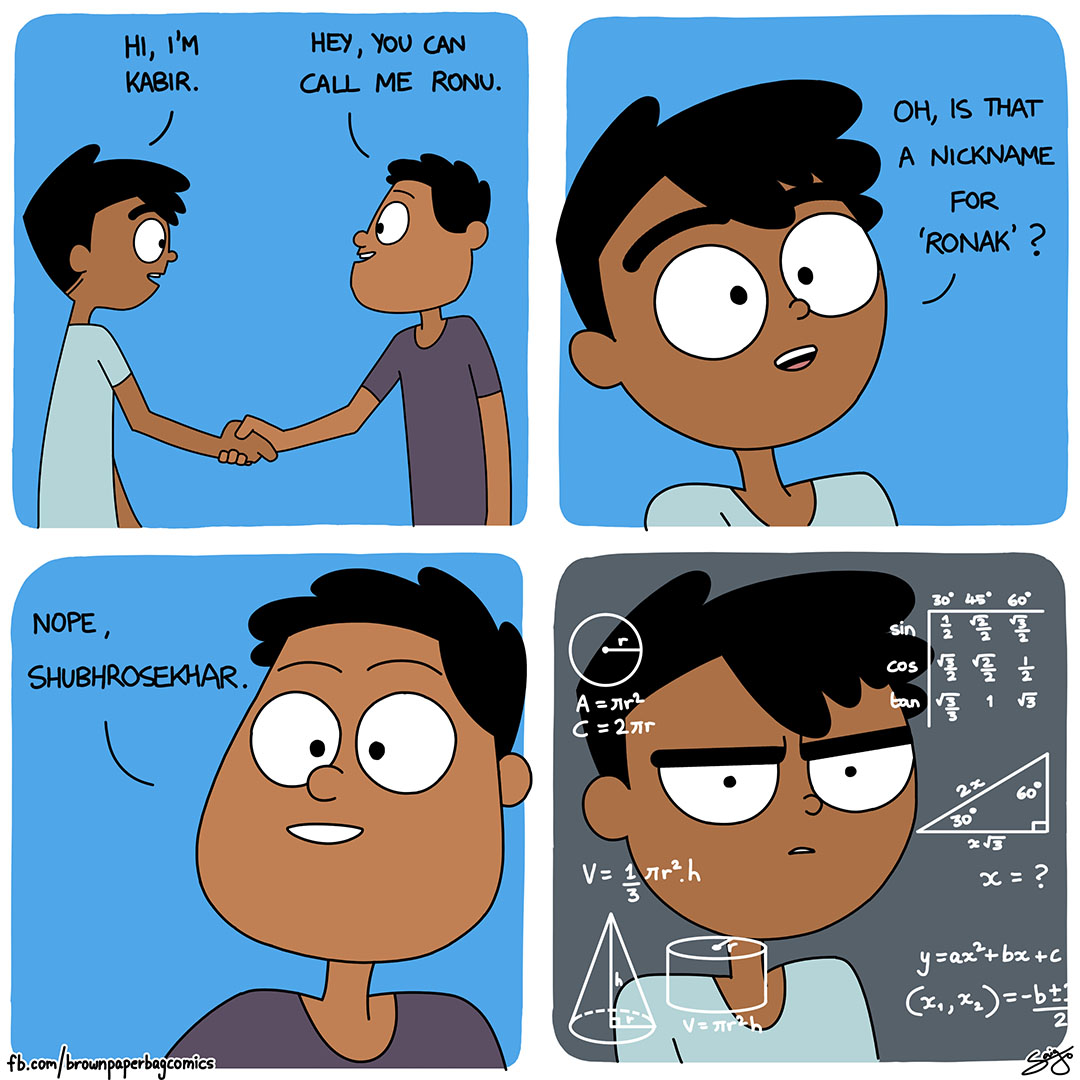 Which is one of your most ‘PUN tastic’ comics that you have created? (can you share an image for the same?)
I tend to keep ‘puns’ away from the comics themselves, but I do make it a point to have a pun in every comic’s caption. It’s hard to pick a favourite, but this one titled ‘Maid ‘Fore Each Other’ is one I’m super proud of. 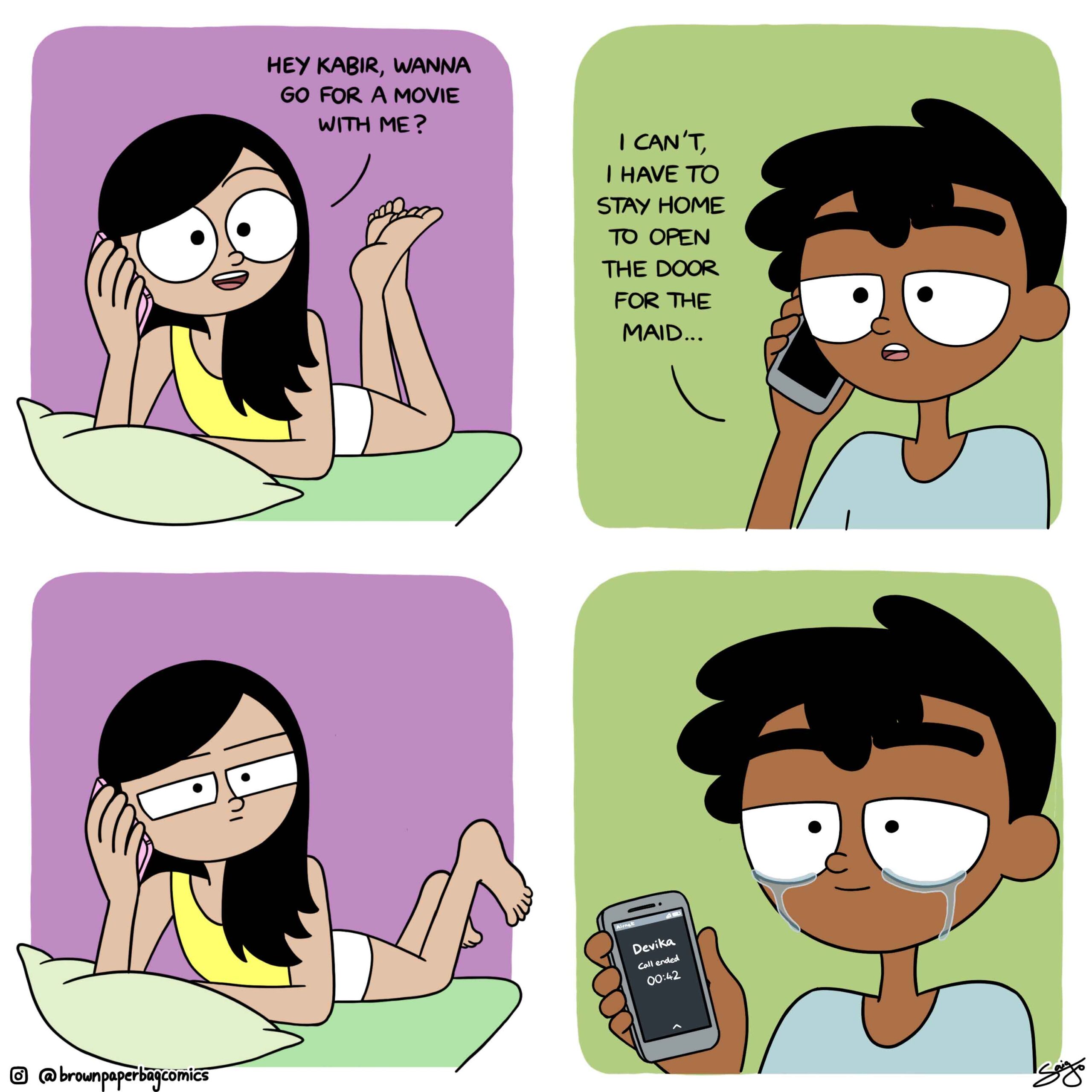 Your comics tend to point out the irony & problems in our day to day life, also they feel very much Indian in the portrayal of certain issues and hypocrisies. But they are not political. Can you tell us more about this?
I think I just felt that I hadn’t read any Indian comics poking fun at all sorts of funny interactions within a family or society, and figured that’s an untapped market I could target. Also, while I do stay as up-to-date as I can with the political happenings in our country and the world, I’m not confident enough to portray my opinions in comic form.
Last year, you started a new comic segment called ‘Saigotherapy’? Can you tell us about it?
Yes! Saigotherapy was primarily to bring in the narrative of ‘mental health’ and normalise conversations about it. 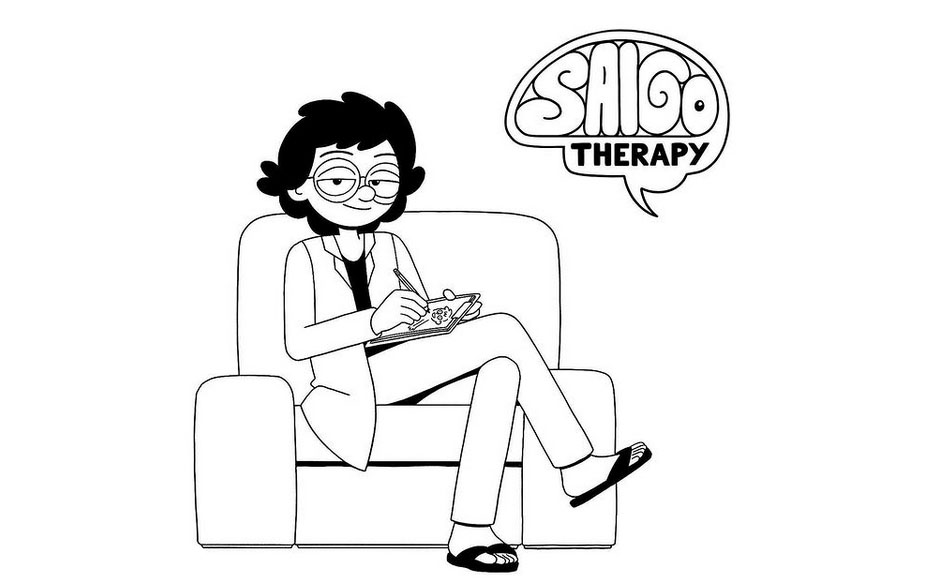 What are your plans for the future? Apart from your comics, is there something else you would like to share with us? Also how much do you dabble with animation?
To be quite honest, being a webcomic artist was never part of the plan. It started almost accidentally and I’ve kept it going because it took off well and I began to enjoy it a lot more as the years progressed. Animation has always been my ultimate passion, and while I have a love-hate relationship with it due to its demanding nature and the lack of ideal opportunities in India, I keep going back to it with the hopes that I can take it forward as my primary work. I keep taking up animation projects, and I’ve always been excited by the possibility of working with a team of exceptionally talented artists and animators!

A common query with being a freelance comic artist is about getting compensated monetarily, how did you deal with this? Any tips / advice you would like to share?
I think we all start off with absolutely no idea and quoting ridiculously low amounts out of a lack of confidence or self-enforced humility. But, at some point, you start to gauge the value of your work through your experiences. I wouldn’t say I’ve “figured it out”, I still sometimes quote absurdly low prices. But that experience helps me quote better in future projects, and that’s pretty much how I’ve set myself up as a freelancer.
A personal tip (that may be terrible advice) is to always quote a little higher than what you think is the right price, and be willing to negotiate it down to the original amount. 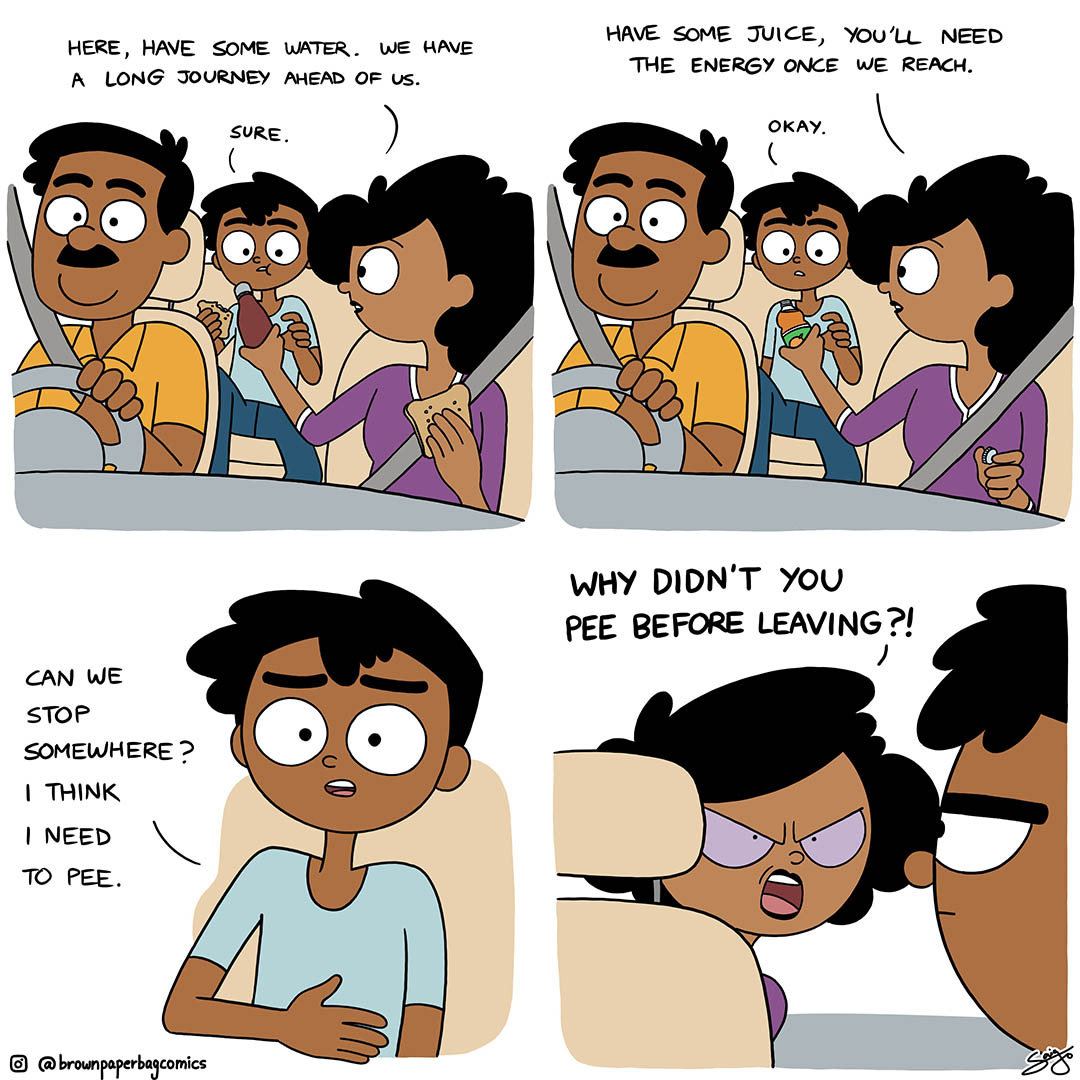 Who is your inspiration? Also your favourite comics & movies (live-action/animated)?
The biggest inspiration in my life is the ‘One Piece’ manga by ‘Eiichiro Oda’. It’s helped me through some tough times and given me the best kinds of inspiration for all kinds of work and all genres of storytelling.
Favourite comic is obviously the same as above. I’m not much of a movie buff, but with recency bias in consideration, I’d say my recent favourite has been 'Spider-Man: Into the Spider-Verse'.
What do you think of the Indian comic industry? Are there any things you wish were better or different?
I unfortunately can’t say much about the print comic industry, but I have seen a surge in the number of webcomic artists in the last five years. Hopefully this popularity, not just in terms of creation but also in consumption, can translate to print comics eventually. While it has never been easier to make comics and build a fanbase, there’s very little in terms of monetising your work directly. Merchandising and other additional ventures remain the only way to make a decent living off of webcomics. 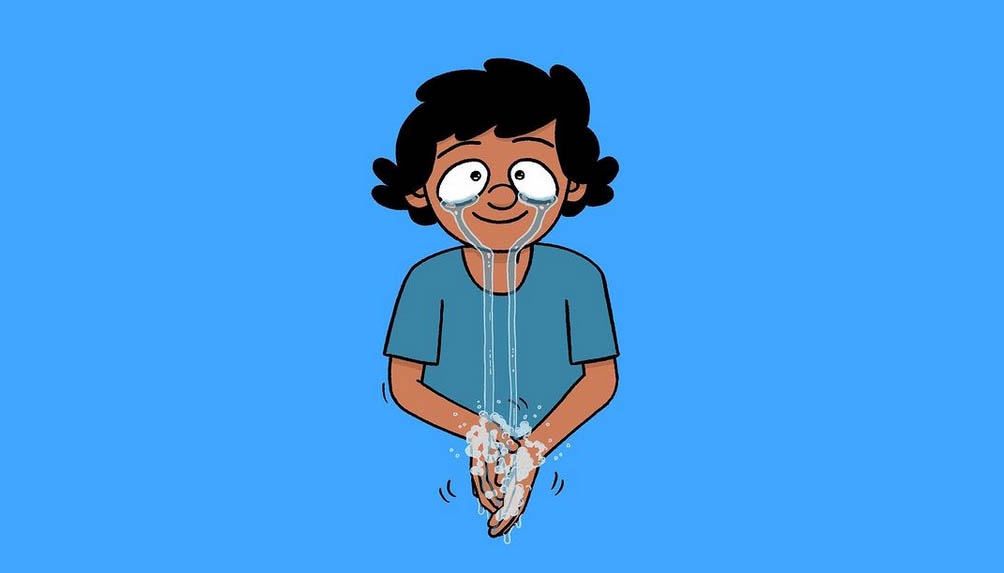 What advice would you give to an aspiring Indian comic artist?
My standard advice to anyone interested in making comics is to just START. Most comic ideas never see the light of day because artists lose their confidence even before putting it out there. You never know when you’ll hit popularity or when the right idea will click with the right audience, but the only way to make that happen is by actually putting your work out there.
We wish Sailesh the very best for his future and upcoming endeavours. You can follow Sailesh / Brown Paperbag in the links below:
Instagram: https://instagram.com/brownpaperbagcomics
Instagram (other art): https://instagram.com/saileshgopalan
Patreon: https://patreon.com/brownpaperbagcomics