Animation in the interest of an emerging nation: Films Division and the short cartoon film

“Nehruvian India’s most frequently invoked figure was that of the ‘infantile citizen’ and his need for state tutelage and protection in order to realize the potentials of citizenship, itself conceptualized as an infinitely receding horizon rather than an existing bundle of rights”

[Roy, S., 2007. Beyond Belief: India and the Politics of Postcolonial Nationalism. Duke University Press, Durham.]
It was via the colonial encounter that India, like many postcolonial societies, familiarized itself with the occidental tenets of 20th C modern nationhood. After ‘unyoking’ itself from imperial Britain in August of 1947, the Indian state galvanized an emphatic project of nation building founded on rapid industrialization, widespread scientific and technological advancement – this, tempered by an abiding faith in rationalism, in wanting to transform an ‘agrarian, regressive past’ to an ‘industrial, progressive future.’ At the seed of this nation building was an adherence to a linear developmental trajectory – a characteristic of occidental industrialized societies – wherein the government championed large scale projects in congruence with its 5 year plans, while businesses operated with broad capitalistic tendencies. 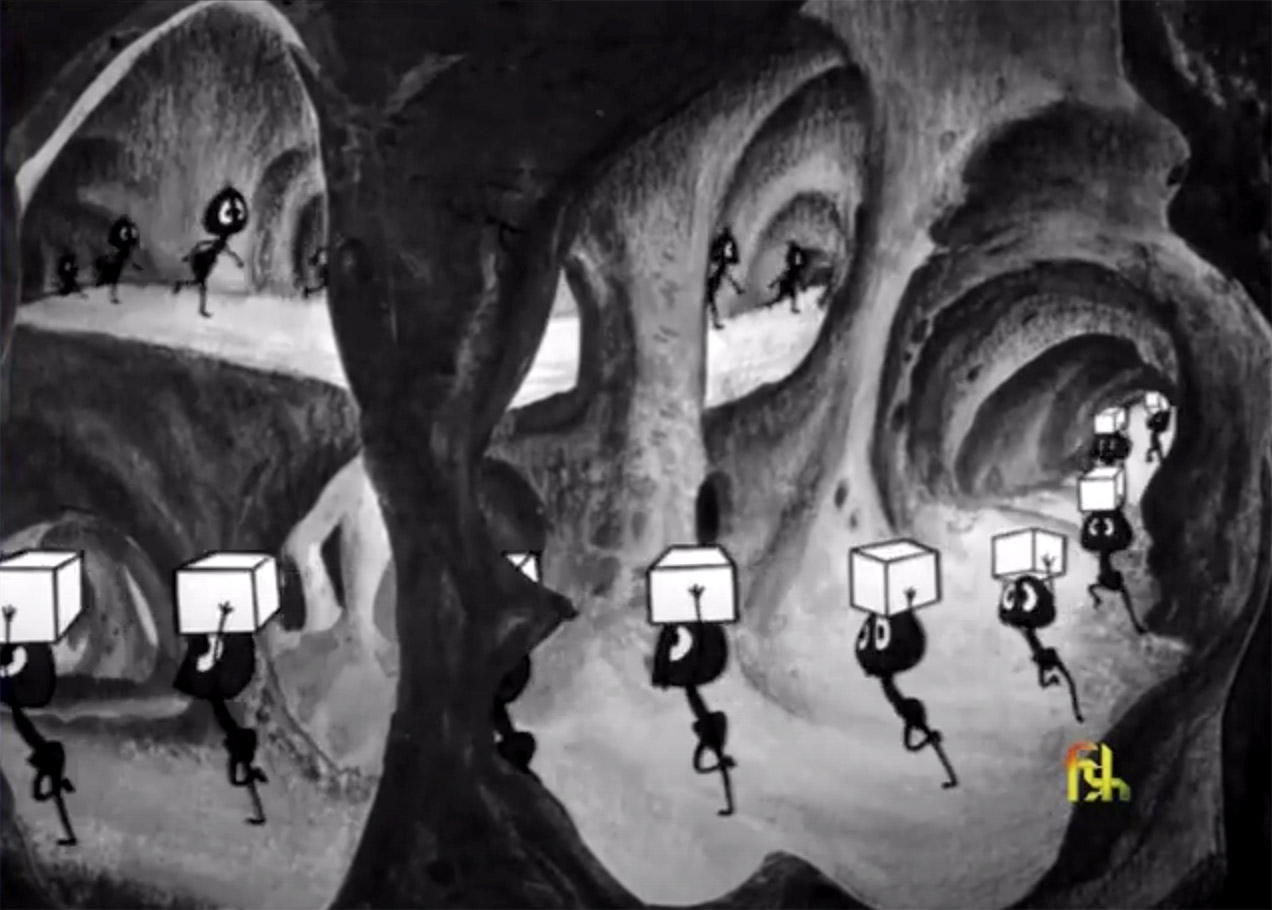 This nation building mission reflected well on the credibility and the legitimacy of the post-independence Indian government. The benevolent state came into being whereby both moral as well as material progress was shouldered as a responsibility of the state (and administered by the elite.) The grand project also became, in part, a project of ‘civilizing the savage.’ Ironically, not far from the resonances of the civilizing mission of the former colonial ruler. Enlightenment universalism, empiricism and rationalism perpetuated colonization. In post independent India, these were deployed in the nation building project, which also entailed the production of short films.
A couple of months after independence in 1947, a proposal for a film unit was approved “in the interest of the emerging nation” (J. Nehru, the first PM.) In April of 1948, the Films Division (FD) was inaugurated for the purpose of ‘creative treatment of reality’ – the production of documentary shorts at the service of the newly independent nation. This interest in the production of documentary shorts has precedence, when short film production for propaganda was state prioritized as a means of unifying a vast stretch of land with a diverse, multi-lingual, impoverished agricultural populace [V.I. Lenin: “..you will have to expand production, and particularly make headway with useful films among the masses in the cities, and still more in the countryside.... You must remember always that of all the arts the most important for us is the cinema” (Sovietskoye Kino No. 1-2, 1933)
In the case of the newly conceived FD, the opportunity to frame a new kind of short film for the emerging nation was somewhat squandered, as there was a fairly seamless transition from the colonial war propaganda producing Information Films India (IFI) to FD. There was the state patronage of the early FD filmmakers, who, in turn became instrumental in ‘enlightening and educating’ the new citizens – and this they did by way of engaging with the audience in a manner assuming them to be more of colonial subjects and less of striving co-citizens. A case in point is the six minute 1949 animation short ‘The War that Never Ends’ created by British animator Mina Johnson (of the Army Cartoon Film Unit) and Indo-French scriptwriter J. S. Bhownagary, with a bulk of the artwork done by Indian artists P.N. Sharma, B.R. Dohling and Ahmed Zakaria. A synopsis of the short reads thus: ‘This cartoon film attempts to acquaint people with preventive methods of fighting disease. It emphasizes the necessity of ensuring cleanliness and countering superstition, the scourge of the masses.’ Ostensibly the messaging is of fighting off disease but it does so in a manner of film form and content that is directed at alleviating ‘the scourge of the masses’, a colonial project if there ever was one. 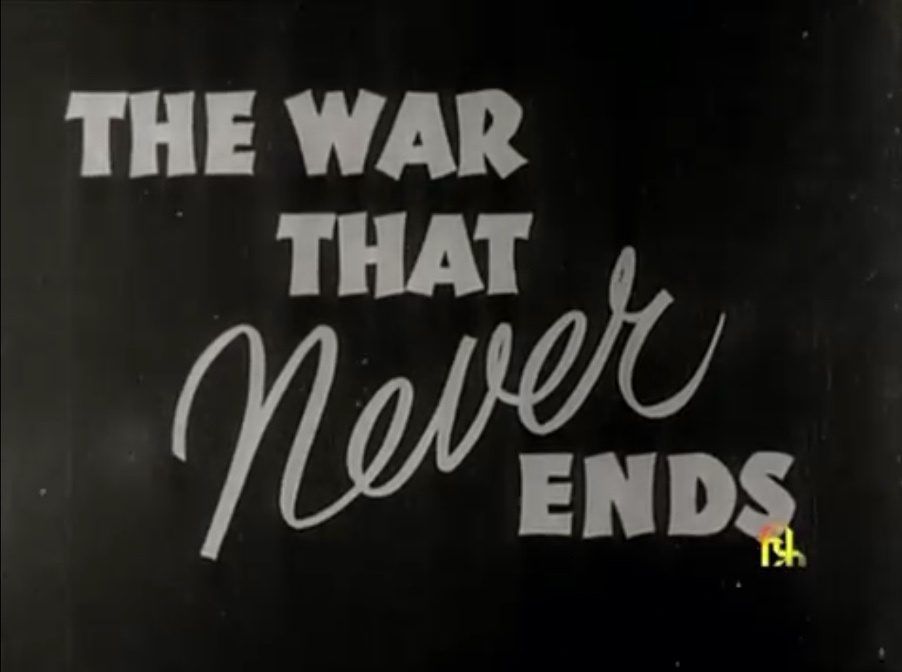 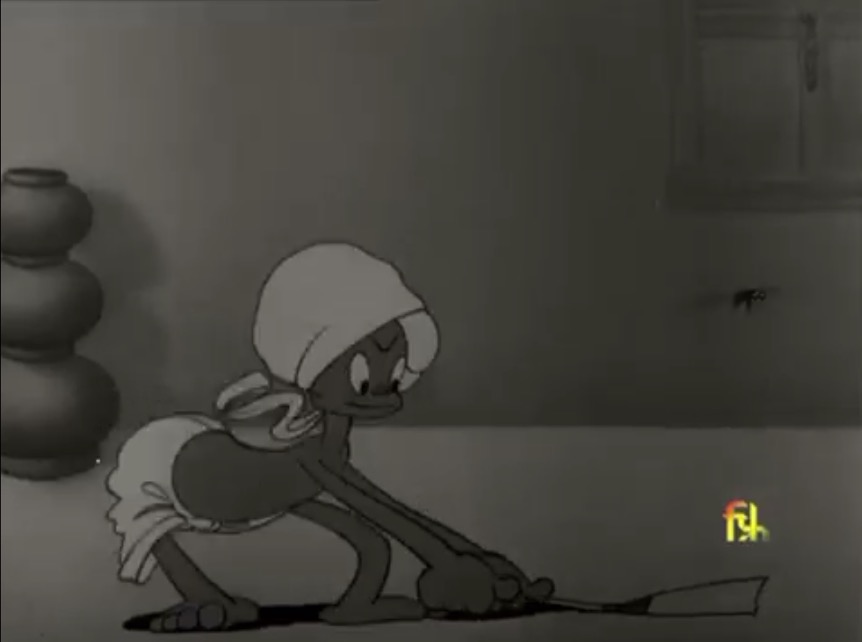 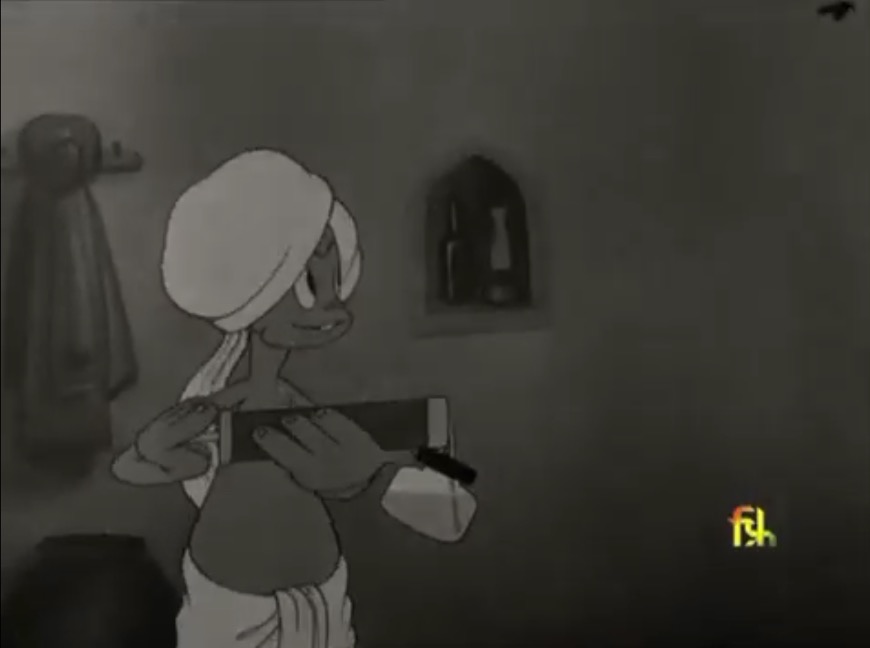 Stills from the ‘The War that Never Ends’
The National Advisory Council for Public Cooperation (chaired by PM Nehru) was established in August of 1952. It aimed to represent diverse sections of opinion in India, and its purpose was to find “ways and means to dovetail governmental activity and public cooperation into one organized effort.” [S. Gopal, ed., Selected Works of Jawaharlal Nehru (Second Series), Vol. 19 (1996).] In August of 1953, an Integrated Publicity Programme for the first Five Year Plan was prepared and taken up at the Ministry of Finance. Towards the end of the first Five-Year Plan in 1956, there were 37 such itinerant field publicity units functioning across India. Reminiscent of Soviet agitki, the nation building film shorts produced by the FD began to travel across the country.
To make screenings possible in remote rural locations, the field publicity officer was assigned either a bullock cart unit, a boat unit, or a van unit, depending on the terrain being covered; and each field unit was equipped with a film projector, a PA system, a tape recorder, and a power generator. 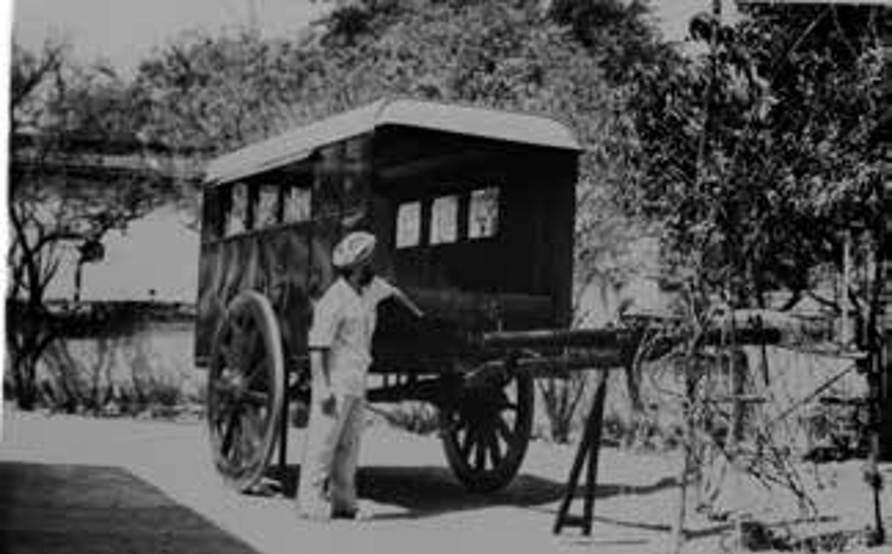 Field publicity bullock cart - 1956. Photo Division of India
The FD loaded these bullock carts, boats and vans with the necessary 16 mm short cartoon films like ‘Dreams of Mauji Ram’ (1956) in the region appropriate Indian language. Directed by early FD stalwarts Govind.H. Saraiya and G.K. Gokhale, ‘Dreams of Mauji Ram’ attempted to ‘educate and enlighten’, a mission put forth by the Integrated Publicity Programme for the Five Year Plans. 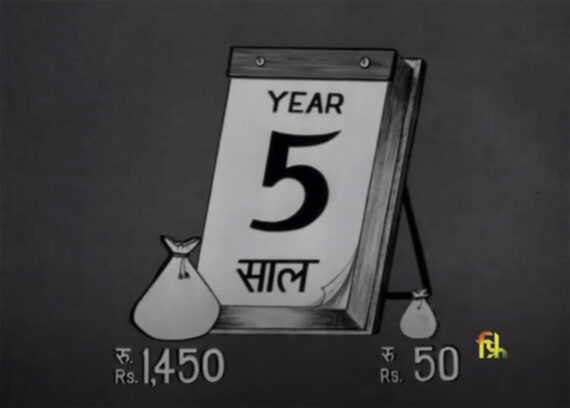 Like many other such FD cartoon shorts, the thematic narrative is that of progress, modernization, transformation and change; a utopian dawn of plenty and prosperity made possible only via state led planned development. In ‘Mauji Ram’ even the normally prohibitively unapproachable elite government bureaucrats (even more so with economically stratified class distances) are packaged to appear as equal to the village peasant, a far cry from the truth of the matter. 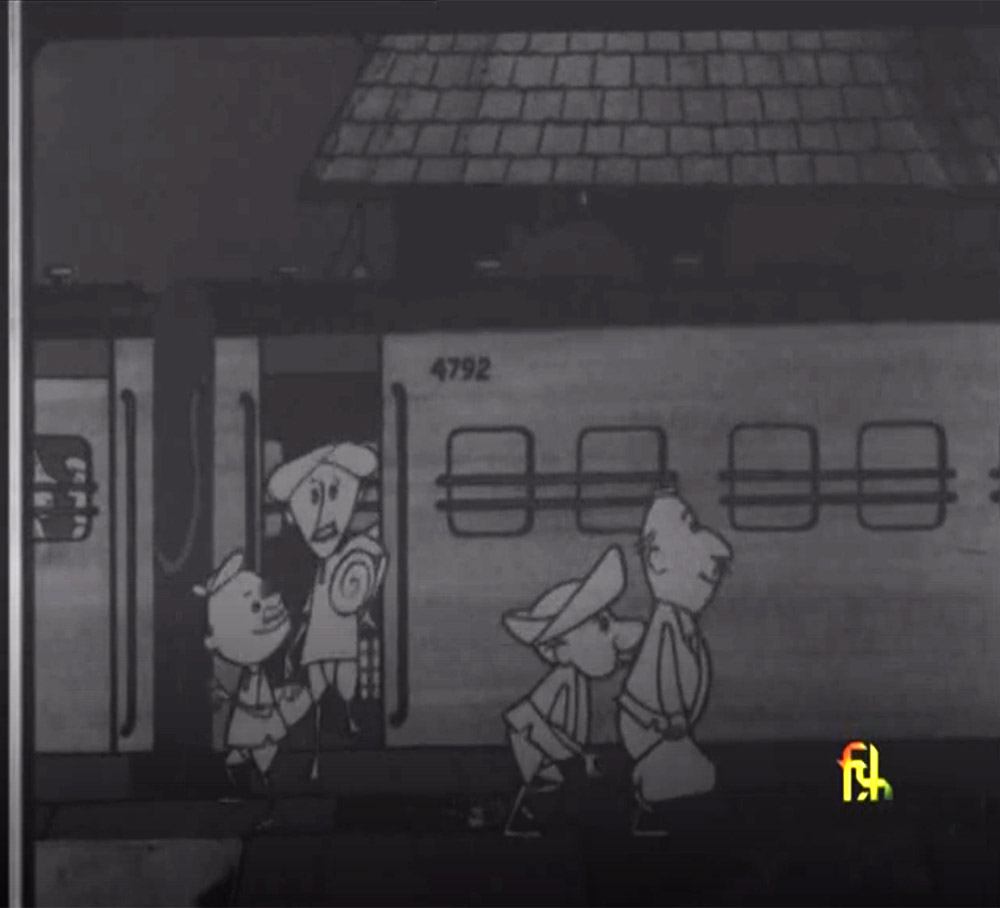 FD Deputy Chief Producer J. S. Bhownagary, during his term from 1954–1957, pushed for an Indian visual turn to the short film content, and that resulted in a 21 minute miniature painting documentation titled 'Radha and Krishna.' The content though rooted in art traditions of India, the addressing of the audience remained paternalistic and benevolent, a re-education of the masses in Hindu mythology.
M. Bhavnani, the ﬁrst FD Chief Producer had an interest in the possibilities of the cartoon film and he invited Disney USA animator Claire Weeks to help set up the Cartoon Film Unit of the FD in 1956-57, leading to the first streamlined 'industrial' production of cartoon films in India. The resulting 9 minute film ‘Banyan Deer’ (1959) is quite well known to the animation community in India – and it suffers from a similar ‘Indian turn’ dilemma faced by Bhownagary, film content being rooted in traditions of India, while film form borrows much from the industrial west and the colonizing forces. Partha Chatterjee in ‘Nationalist Thought and the Colonial World: A Derivative Discourse’ (1993) argues that while nation building and liberation are powered by a distinct determination to make a break from the foreign, colonizing culture, yet that rupture cannot be leveraged on values that are traditional for they are very often ‘inconsistent with the conditions of historical progress.’ Chatterjee further argues that the ‘ecology’ of modernity render ‘cultural homogeneity’ a requirement, ‘an essential concomitant’ of modern nationhood based on industrial society.
Srirupa Roy in ‘Moving Pictures: The Postcolonial State and Visual Representations of India’ (2002) makes clear how particular emphasis was laid on the ‘much-needed’ progress of India, with the FD capping the colonial mandate, making it obligatory (for each cinema in post independent India) to exhibit FD short ﬁlms before the start of the full length feature ﬁlm, thus ensuring that the 52 short ﬁlms produced per year had an (captive) audience. The critical voice was yet to gain ground, and the modern nation building project via the cartoon short was well and truly underway.
Czech trained animator Pramod Pati headed the FD Cartoon Film Unit, and he directed the 8 minute cartoon short ‘This our India’ (1961), with animation by another early stalwart G.K. Gokhale. The synopsis reads thus: “This cartoon film, presents in a nutshell, with the help of animated maps and diagrams, some geographical and economic facts about India. It shows how the people of India under the Five Year Plan Projects are striving to achieve a fuller and better life for all.” 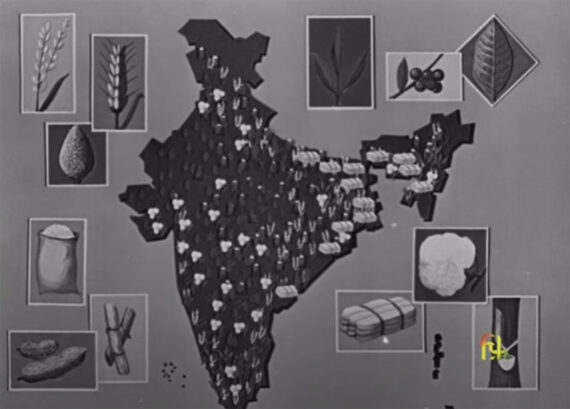 VO “..and for us, no matter where we live, north, south, east, west, under our five year plans, we are changing the face of our ancient land, changing it into a progressive land, a richer land, promising a brighter future for all of us..” There is a constant reference to transformation and change in this short, and the inclusive ‘us’ is deceptive, as the nation state addresses it’s captive audience in celebrating the relentless march to industrialization and modernity. The movement from India’s natural wealth to prosperity via five year plans is not even a thinly disguised attempt to normalize the five year plans.
Pati followed this up with two more cartoon shorts in 1962, 'Building A Nest' delving into encouraging children to inculcate the habit of saving (paternalism personified) and 'Swasthya Aur Sananda (Healthy and Happy), dealing with rural hygiene and sanitation, and how sickness and disease can be kept at bay – not unlike the alleviation of ‘the scourge of the masses’ of ‘The War that Never Ends’ (1949.) In 1965 Pati directed another cartoon short, ‘A Fable Retold’ urging citizens to save for a rainy day via a post office deposit scheme. 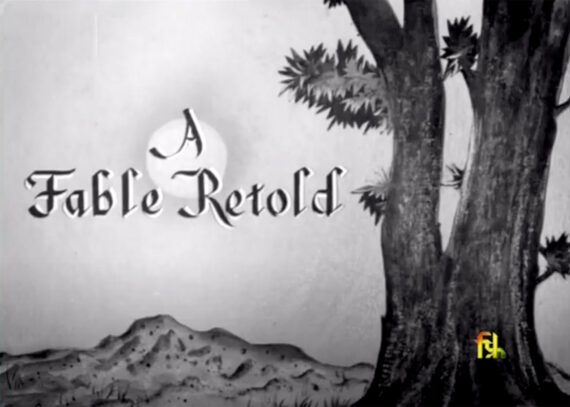 ‘Be wise’ the voice of God (and the father) exhorts, “save for a rainy day like Lakshman Ji and the busy ants, and your future will be just as rosy.” The promise of a prosperous better tomorrow is around the corner, thanks to the infinite wisdom and hand-holding by the state. An experimental animator of the caliber of Pati had to distinctly perpetuate the nation building directive of the state, and it is only much later that he found the creative liberty to express his natural experimental tendencies in animation, and for that, FD is richer.
A cursory glance at the content of the 1960s animation shorts produced by the FD offer these ‘developmental’ themes: five years plans for national development; investments and savings via various financial instruments and aiding the nation in its defense and development; importance and benefits of family planning; importance of vasectomy; citizen volunteers to help the people of the drought stricken parts of India; food grain import and distribution to fight drought; and dignity of labour. One could argue that Nehruvian developmentalism’s paternalistic demeanour to the Indian citizenry and its particularity in labelling the social order into groups of ‘unaware masses’ and ‘aware experts’ would have, in a manner, articulated the authoritarian trajectories of postcolonial India.
In a frightening distancing from the realities of the everyday, rarely did the FD cartoon film engage with the fragility, anxieties, mobility and turmoil that accompanied the early decades of the birth of the new nation state. In failing to articulate the state-critical aspects and the subtly nuanced spirit of the challenges that characterized daily life in post-independence India, early FD animation film, stopped short of tapping into the full potential of the medium, and chose instead to participate in the global transformation in political geography and economy, in transitioning from empire to nation.
The writer is an independent academic, design educator and communication thinker currently based in Mumbai, India. You can reach him on milindo@milindo-taid.net 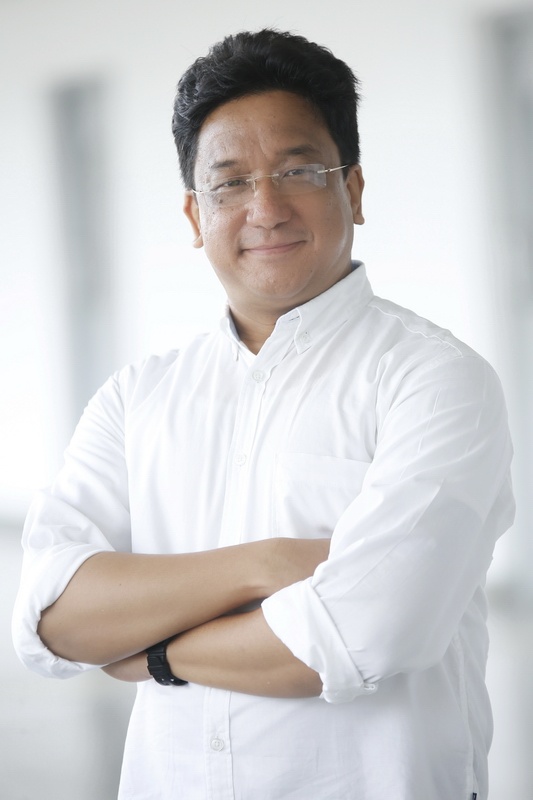