The Fox of the Palmgrove by Divakar Kuppan

"A random television visual triggers the memories of an old man in which we go through a sequence of random events which summarises his entire life." That's how we could best describe this amazing short film 'The Fox of the Palmgrove' by an IDC Bombay student Divakar S Kuppan who used Paint-animation technique to bring his story to life. 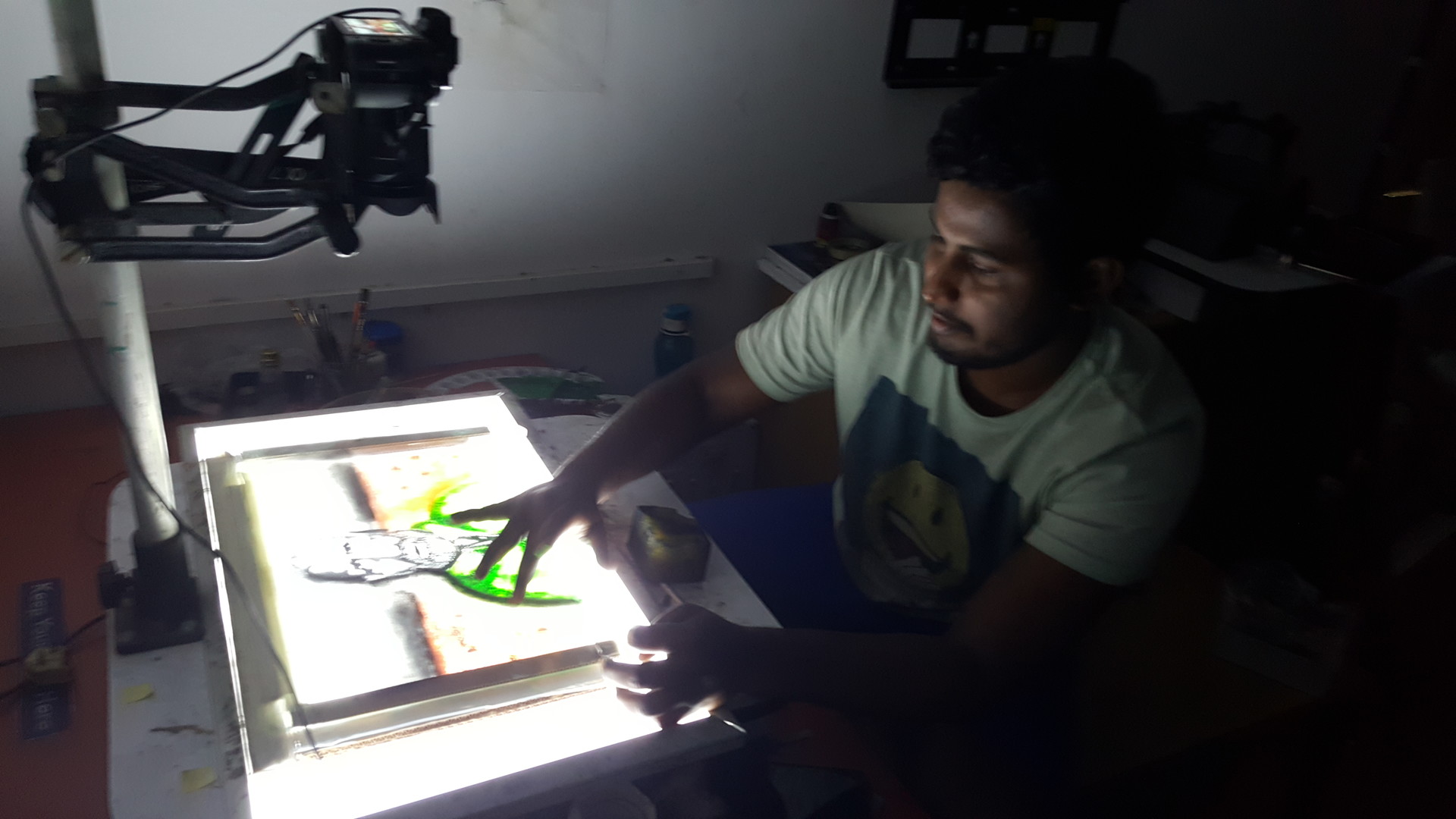 AG: Hi Divakar, Can you tell us about yourself, your interests and your creative journey so far?
I am Divakar from Elavur near Gummidipoondi, Tamilnadu. I was a Software Engineer by accident, and an artist by nature. I was also handy at making good use of the internet and studied really great films by doing so.
Back then in my engineering days, I was searching for a concrete body where I can apply my artistic skills and film Knowledge. One fine day, I found that my drawings can be applied in making animation films.
Then, I told myself this is what I am going to do for the rest of my life. 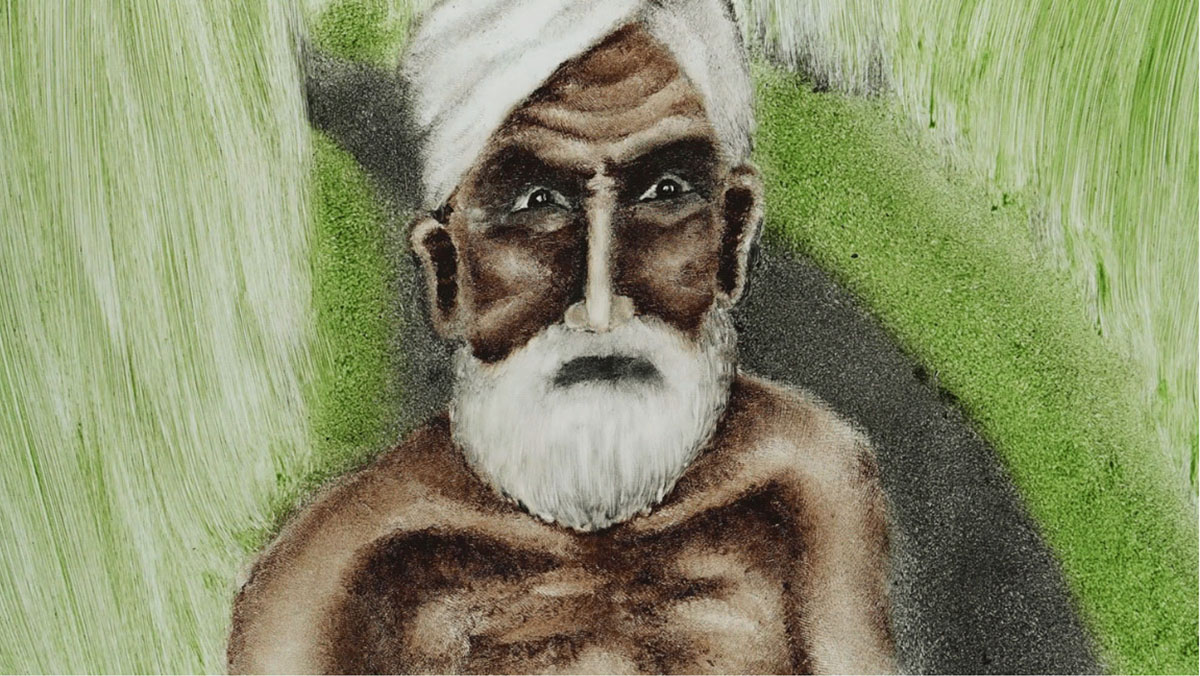 AG: What was the inspiration that triggered the story and the characters? How much role did your Grandfather play in the portrayal of the character?
My village is the inspiration for the story and my Village is no different from every other Village in the country. Globalization has its own set of advantages but it has brought a lot of changes in the lifestyle of the rural face of the nation. As they say the heart of the nation lies in its villages. But the agony in seeing the heart gradually losing it’s evergreen charm has always concerned me. People were slowly burying up their age old ethnic values and knowledge and resources little by little. What was once a sustainable ecosystem, is now on the verge of extinction. I have seen this whole metamorphosis dance around my village and my grandfather in the past decade. My Grandfather was once a very hardworking man who managed 15 buffaloes and a few acres of land was now just left to ponder upon the television for the most part of the day after selling down everything years before. Okay, Globalization is good, it makes life easier and comfortable but at what cost? What’s going wrong, are we witnessing the last of our agricultural lands, are we earning all our money to build our own custom made coffin and many more. I wanted to tell all these in a holistic fashion without getting into the narrowed details and corridors. 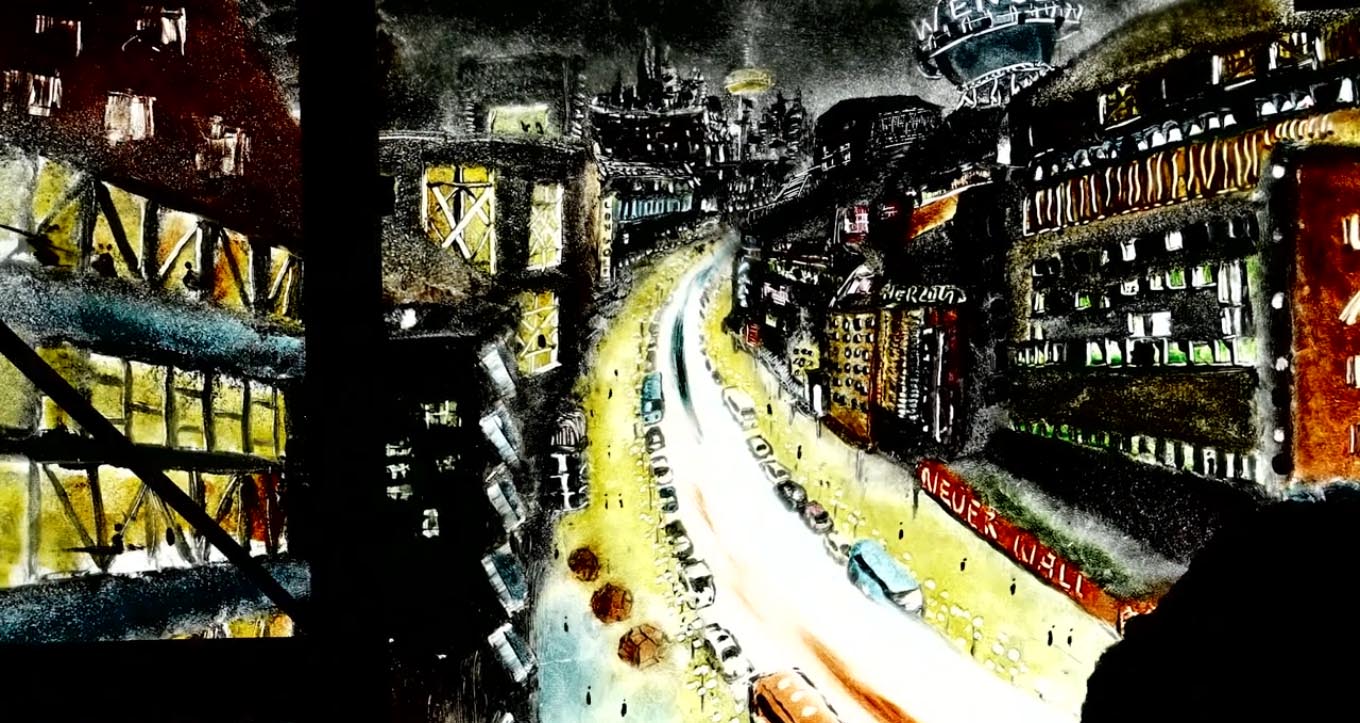 AG: Why did you choose Hamburg (Germany) for the present backdrop? And how much of an influence did your personal life play when the story flashbacks presumably to a village in Tamil Nadu (India)?
Hamburg, Germany was not just a random option. The part of the choice was caused by a Phd German student who voiced for a Television narration in the film and told me a little about his city. I just needed a contrasting urban landscape with the village to signify that the family has got urbanized now in the present. Showing an usual Chennai, Mumbai or New York as a Urban Landscape would have been a cliche, so I went down with this German City, which later I learned it was the place of the world’s oldest Merchant bank and it symbolizes this particular city as a good indication for the cause and subject of the film. 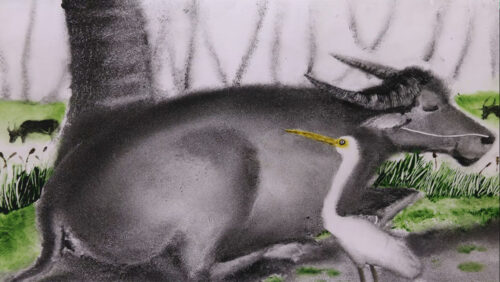 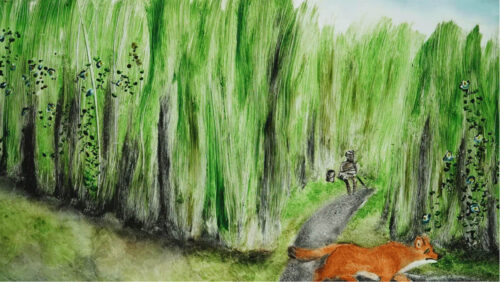 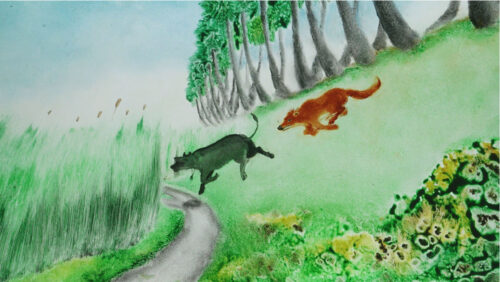 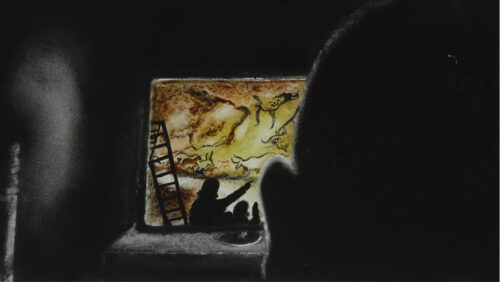 AG: The story feels very personal, each visuals seem to evoke a personalised reaction and every interpretation can be different. There also seems to be subtle symbolism in form of the flies, the Bull, the woman singing the Ilayaraja track. Are we right in assuming this?
Yeah, the film was meant to work in a very universal way irrespective of whoever the viewer is and wherever he’s from.
Not to forget, the majority of the Indians have their roots in the Villages or they were living once in the villages but later got urbanized due to a range of reasons. The film was designed to trigger the personalized memories to anyone who has some direct or indirect connect with the villages, the cradle of civilization. The Symbolism were there through a lot of things, especially the creatures in the film and it’s left to the interpretation of the audiences. 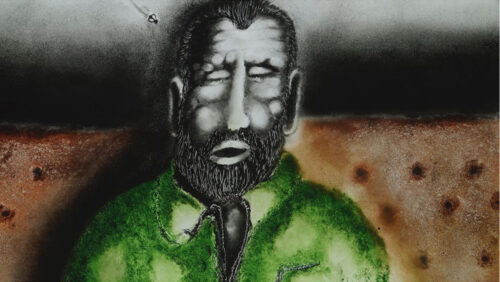 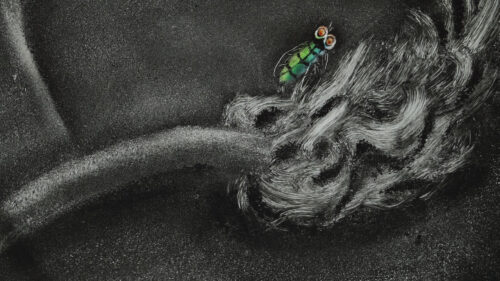 AG: For most of us, Aleksandr Petrov is someone that foremost comes to our minds when we think of Paint animation. What are your thoughts on it? Also why did you choose this technique of animation (rather than a completely digital one)?
Yes, even though there were animators like Caroline leaf, Martine chartrand and few other animators who attempted this meticulous animation technique. It was Alexander Petrov who achieved a level of magnum opus in this craft. In fact his every film is a magnum opus and there’s no second argument about it.
Tarkovsky has once said that among all the arts, film is a very young art that’s still
under evolution and for the film to attain the status that other arts have attained, it badly needs the help of the other arts like music and painting, etc. His statement is something marvellous and fascinating to ponder upon. And, for me, I would say Alexander Petrov has solved the evolution of film to an ultimate pinnacle through his films. He has achieved the ultimate art status for filmmaking in his works. He retained the soul of paintings in his filmmaking process unlike anybody in the history of cinema has ever achieved. And my film is just only a microscopic tribute to his films from which I have learned so much like most of us. Moreover, I thought my aesthetical requirement for this particular story can be justified only through the paint on glass technique. 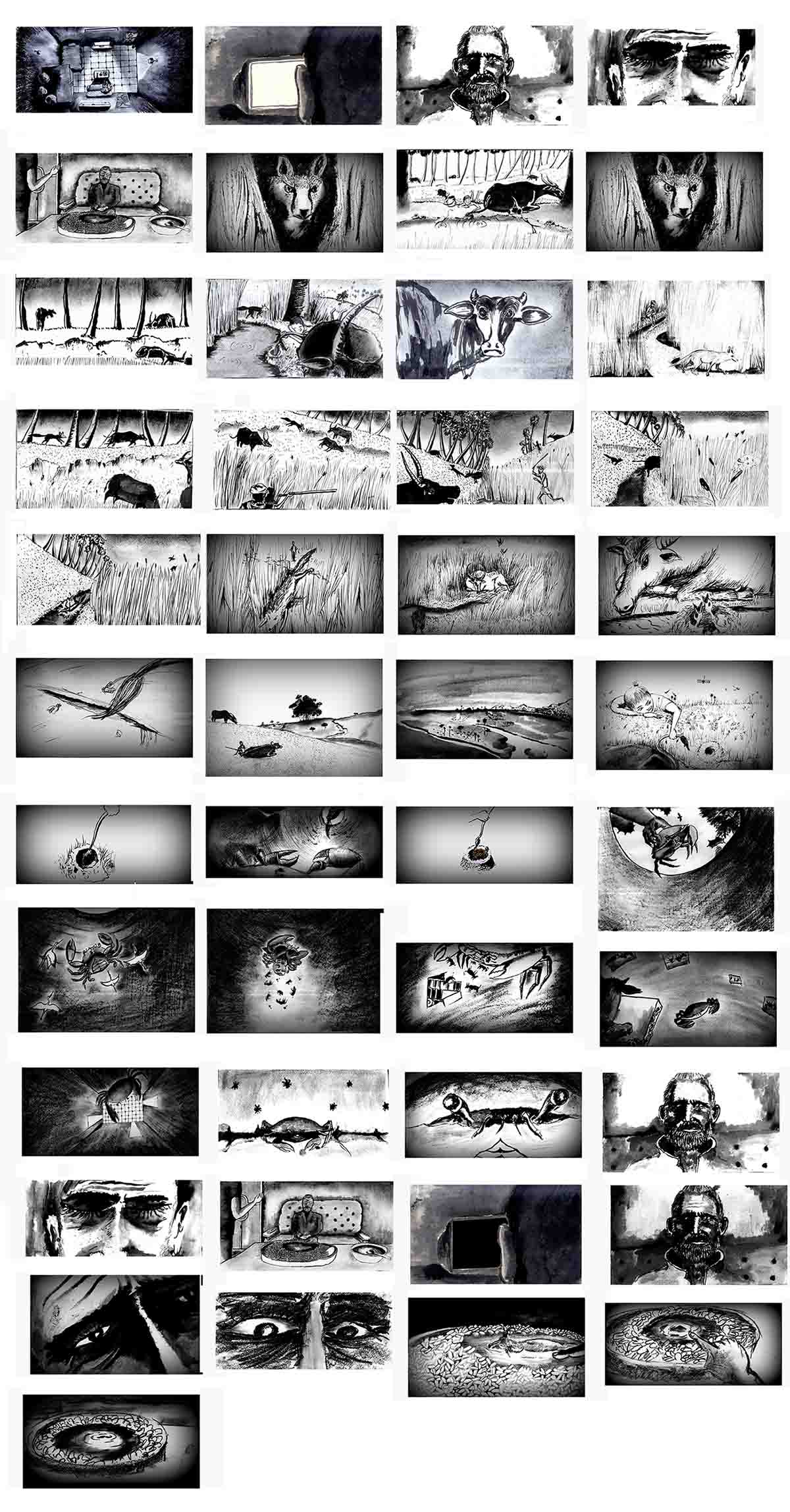 The Storyboard
AG: What was the production process you followed? How much time did it take to complete the film?
I built my own multilayered setup from the scratch using glass and cardboards. Though I did Paint on Glass Animation, I wanted the visual aesthetics of the film to be quite unique. So, I experimented a lot with the textures made by different surfaces like woollen garments, cotton plugs, sticks, sponges etc. unlike only the finger impressions practiced by the other Paint on glass animators. I completed this film on straight 100 to 105 days and nights following a very strict regime of less than 6 hours bed time per day. 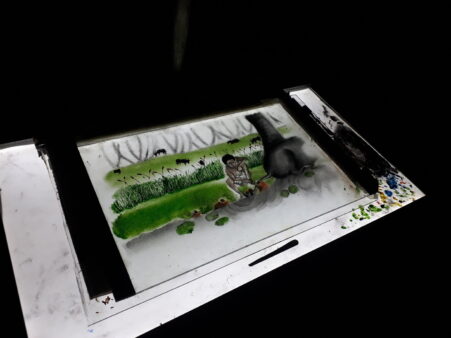 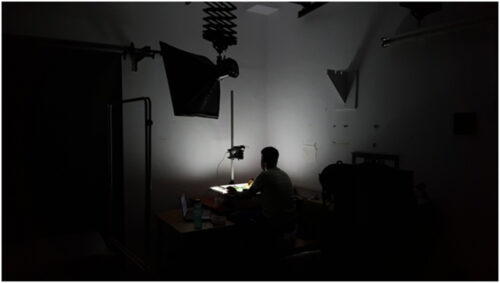 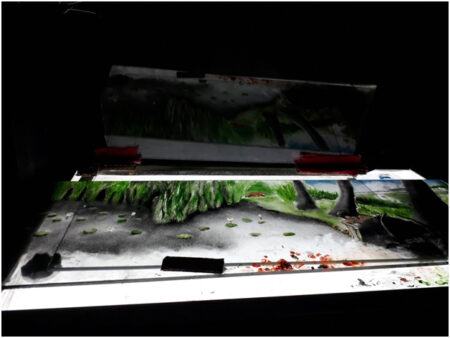 AG: You have mentioned of being influenced by Andrei Tarkovsky's films. Can you elaborate on this?
Tarkovsky was the person who showed me the other face of Cinema, the original face - Cinema as a pure art. I saw his film ‘Stalker’ when I was just 17 years old, the impact the film has left in me, was quite powerful at that curious age. And it took me years to think out of the Tarkovskian mindframe.
His works would pull you down the rabbit hole to some heavenly depths and would keep you sedated down there permanently if it wants. He was such a Singular and a hypnotic filmmaker. For me, the worlds of Tarkovsky and his film grammar are very special. They would definitely have a part to play in my works. 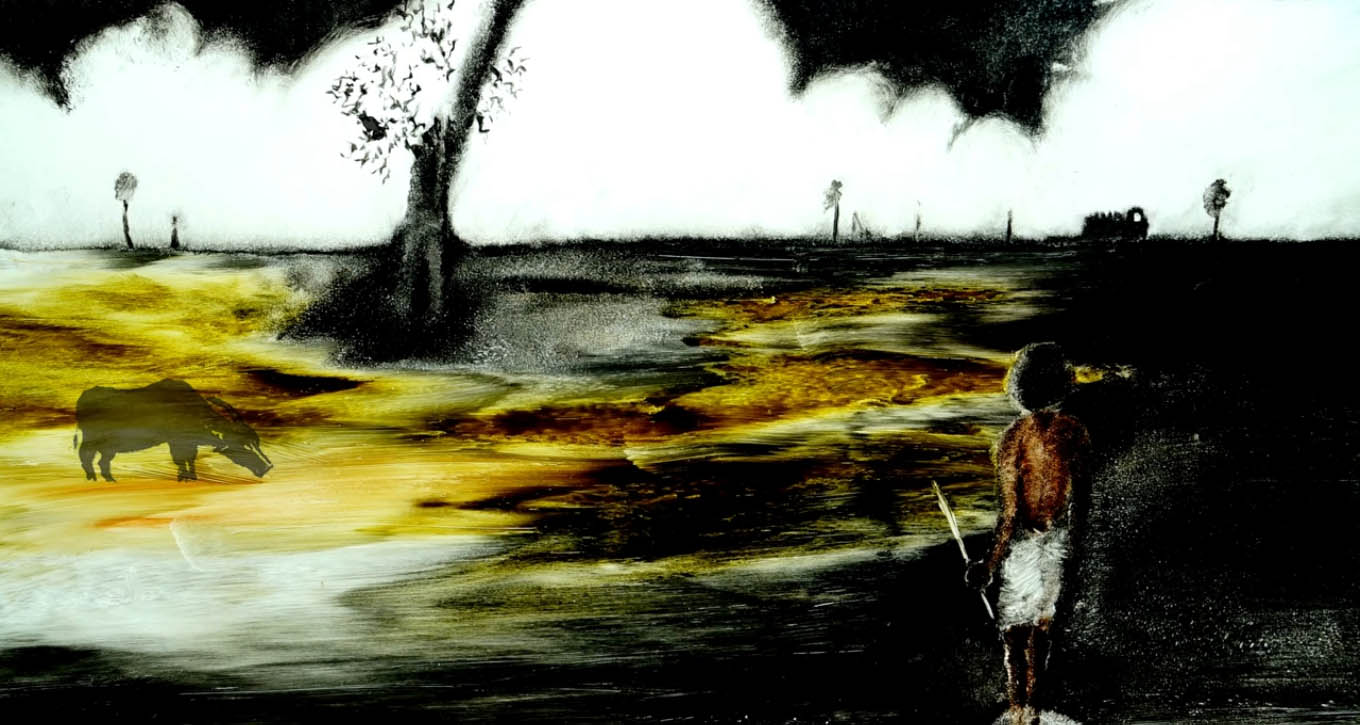 AG: What do you think of the animation industry in India? And how is it in Chennai? How would you like to see it improved?
Be it Chennai, or India as a whole, the Animation Industry is doing just fine. They are no shortage in terms of talent and resources are on par with the western and far eastern worlds. They are doing a lot of world class content for clients abroad. They also need to do some world class indigenous content too. They have done and doing a few but it needs to be done in more quantities. To help in the process, all it needs are a lot of crazy creators. Creators with passionate film inclination and it’s quite encouraging to see a lot of such minds nowadays. We need such minds who would fight at any cause to bring out their ideas into a completed film. And no tree will grow up without a soil, and there are quite a few wonderful studios interested in animation filmmaking, but it’s lovely to see their numbers increase gradually. Not to forget, the power of independent animation filmmaking, with the availability of Open source resources, powerful machines, and the crowd funding facilities.
Nowadays it’s possible to pull out miracles single handedly too and people have done it in the past too. I don’t have any opinion about the application of animation in other horizons than making cinema.
AG: Obviously you are a ardent fan of Andrei Tarkovsky & Aleksandr Petrov. Regardless, can you tell us about your favourite movies? From these directors or otherwise?
Other than them,
My Top 10 directors are:
John Carpenter, Jacqueus Tourneur, J. Mahendran, William Friedkin, Wim Wenders, Jean Pierre Jeunet , Juraj Herz, Mario Bava, Joseph Losey, Freddie Francis, Nicholas Winding Refn.
[These people are absolute auteur in their own sense and some of their stories are
very unique and inspirational]
My Top 10 Films are:
The Swimmer (1963), Oliver Twist (1948), Rec (2007), Umberto D,
Embrace of the Serpent, Sorcerer (1977), Once upon a time in Anatolia,
Plague Dogs (1982), Kes (1969), Idiots and Angels (2008)
AG: Also is there any upcoming project that you would want to talk about?
There is an another project called Balwadi aka Kindergarten whose trailer was released recently online: 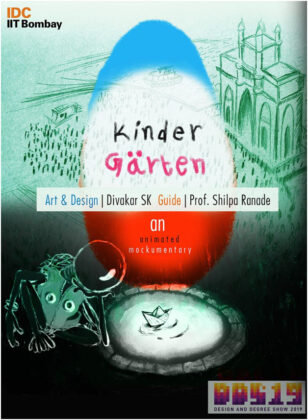 In this film, I have experimented with various animation techniques and had
complete fun. It’s completely different from my film, ‘The Fox of the Palmgrove’
And it will be a thought provoking, as well as a highly entertaining 13 plus minute artistic ride. 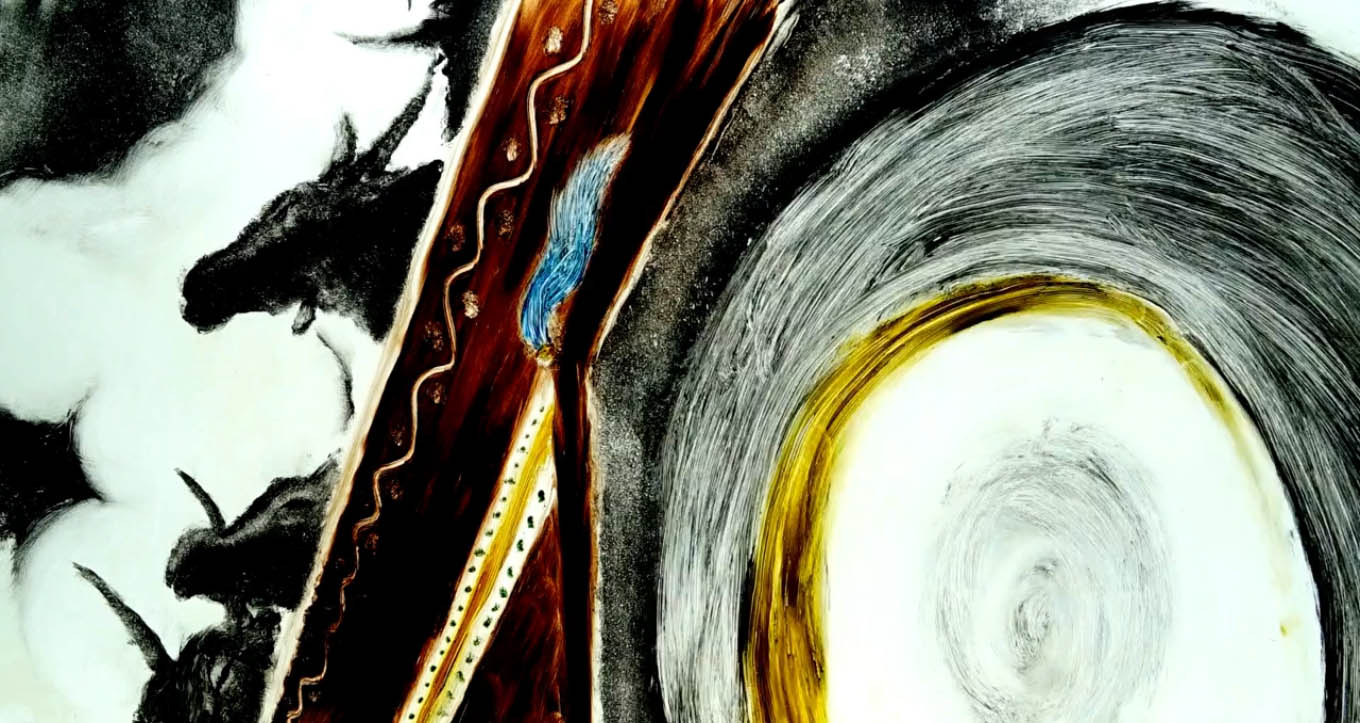 AG: Do you have any advice for aspiring animators? Especially for those who are planning to venture into Paint-animation?
Do not constraint yourself to a particular animation style or genre. Explore Cinema. Cinema is very big and it’s expanding every day like the universe. So study cinema as a whole, I know it’s practically impossible but be in that process, it’s never the end pretty much like other art. And at the end of the day when it comes to a project, believe in your idea or the story and everything else, such as the medium, aesthetics, treatment etc. will follow. Always remind yourselves, there is no failure in art.
AG: Thank you so much for answering our questions, we wish Divakar the very best for all of his future endeavours!
You can contact him at:
Facebook: https://www.facebook.com/Divastorm7/
Instagram: https://www.instagram.com/dvadjoker/
Youtube: https://www.youtube.com/channel/UCO3T6pRFOxtu3CsmJCx8lLQ
Behance : https://www.behance.net/divakarthewalker7ca4