High Fantasy storytelling, as a genre, will commonly always be attributed to Tolkien. He was the author who brought away elves and dwarves from the realm of fairy-tales and old-wives’ stories, into a visceral world with its own mythology. The Professor is regarded as the father of High-Fantasy, laying the basis for future storytellers such as J. K. Rowling, Eoin Colfer, Christopher Paolini, Garth Nix, Andrzej Sapkowski and George R. R. Martin. Tolkien envisioned a world where elves and dwarves were active protagonists creating history. They were not the mystical beings furtively breaching the line between the great wilderness and civilization, as in the Grimms’ tales, existing in a realm separate from our own. It is to this vast body of work in the fantasy genre, that I owe a great debt. The worlds that he, his contemporaries and his forebearers created, inspired a great love and thirst for alternate worlds with a deep lore and mythology. 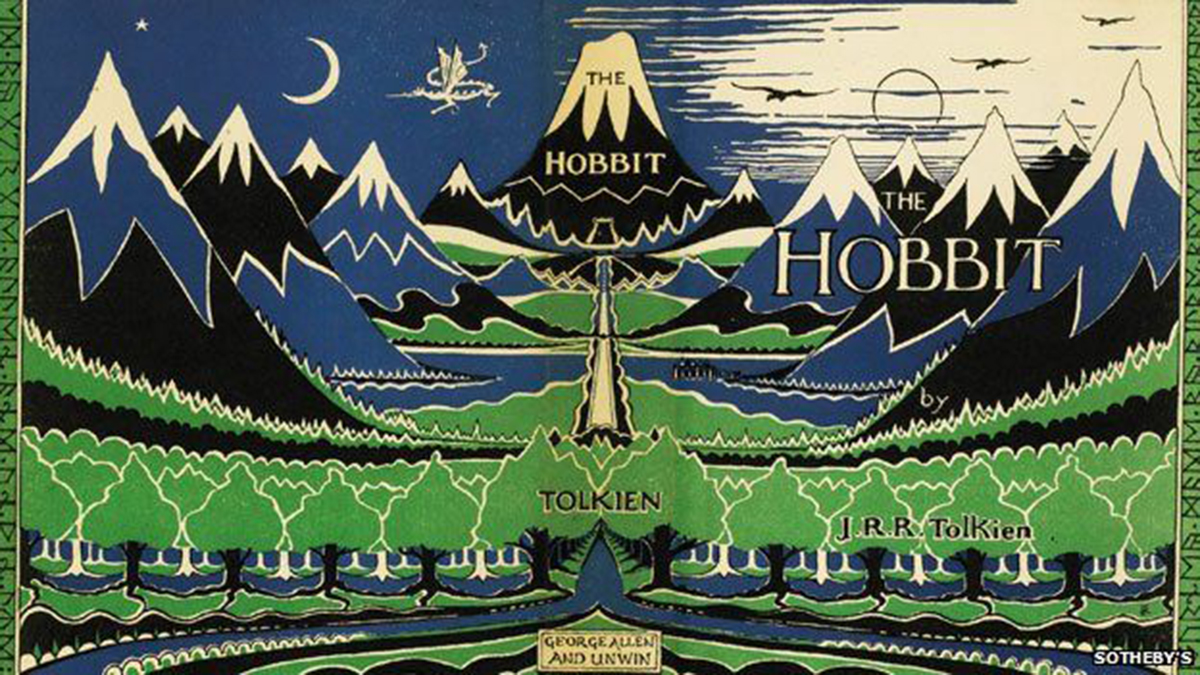 The original cover of The Hobbit by J. R. R. Tolkien
When I was introduced to the wildly compelling realm of video games, it was this thirst for adventure and mystery that pushed me towards playing RPGs like Skyrim, Dragon Age Origins, Breath of the Wild, etc. I must admit, RPGs isn’t the only genre that I have played, but it has always been the games with a solid storyline that have really appealed to me. There is something truly fascinating about being transported into a world that exists outside of one’s own experience. A world that runs itself without my being there to experience it. It really is a paradoxical allure after all, as the real world is very much the same. The allure of a richly narrated world is characterized not only by the respite it offers but even more so by the sense of shared history. A group of people who revel in the trove of stories and the rich lore that one can search for and find hidden in these worlds. It is probably this sense of shared history that has led to the emergence of fan following (read, evolutionarily a tribe with its own religion) and lore for franchises like Star Wars, Star Trek, Dr. Who and Halo among others.

The Dungeons & Dragons 5th Edition Essentials Kit
Among these games is a curious RPG by the name of Dungeons and Dragons. More accurately a TTRPG (Table-Top Role-Playing Game), DnD, created by Gary Gygax, combines elements of High-Fantasy, Hero-Fantasy and Swords & Sorcery genres. I was first introduced to the world of DnD (even though I did not know it at the time) through the video game Neverwinter Nights. I would find myself engrossed in this game for months, traversing the detailed world of Faerun. The varied topography, vast maps, myriad enemies and diverse NPCs had captured my imagination. I had begun writing my own fantasy stories involving elves and drow, paladins and rogues. I was fleshing out maps and relevant lore for the worlds I was creating. Soon after I began finding more such games, although unrelated to DnD. Little did I know I had set out on a path which eventually would lead me to the year 2021, when the Covid19 restrictions were in effect in India. On a whim, I purchased the Starter Set of DnD 5th Edition, with no thought to Neverwinter Nights whatsoever, thinking I would be able to keep myself and a small group of friends engaged. I had embarked upon a herculean task unbeknownst to me. 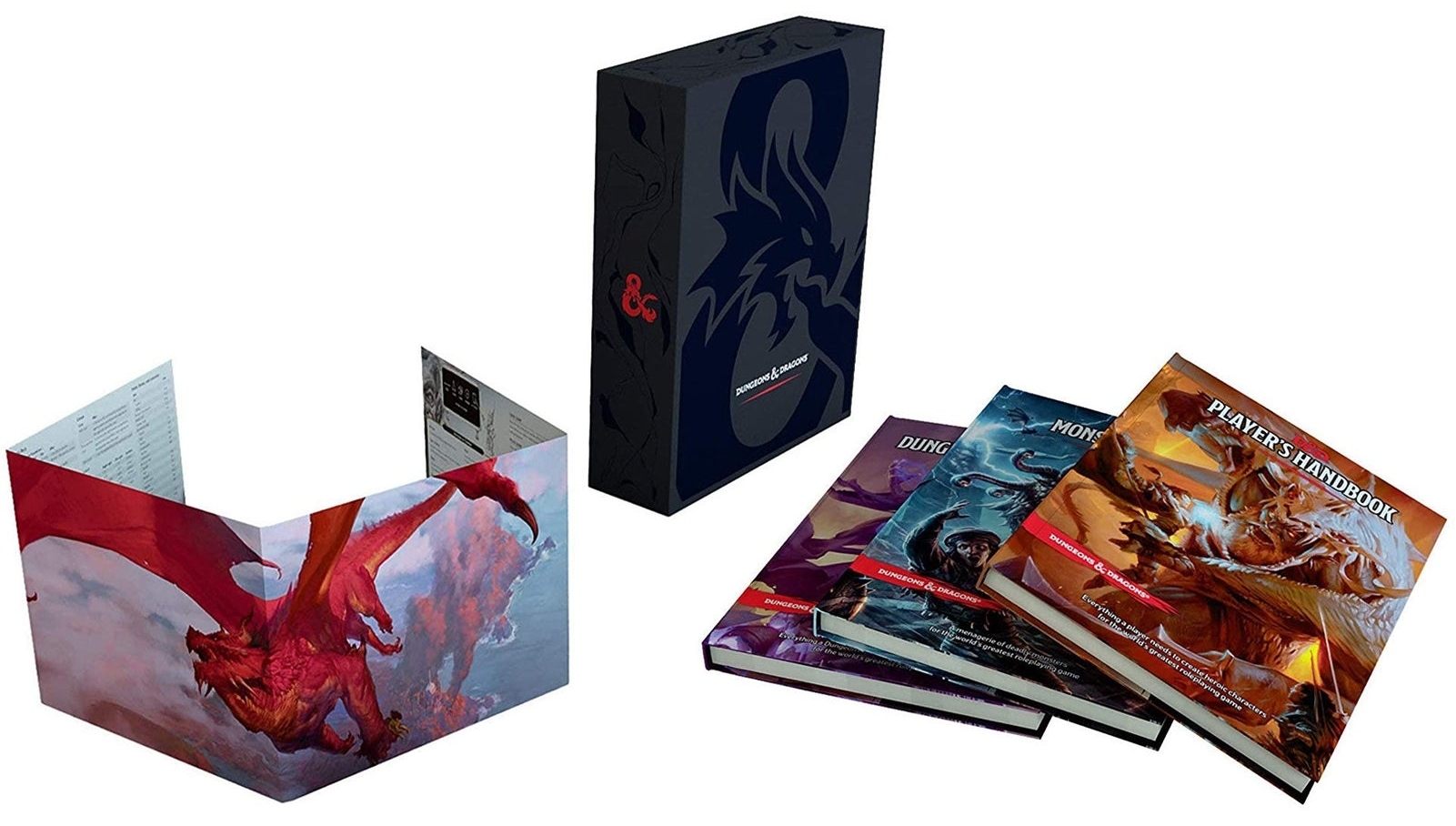 The Dungeons & Dragons 5th Edition Core Rulebooks
My thirst for information and lore left me unable to play as the starter set only brought forth more questions. I wasn’t satisfied with the 11-page rules provided in the Starter Set and eventually ended up investing in all the source books available for 5th edition DnD, comprising some 10 odd volumes, 300 pages apiece. It became quite apparent to me that I would have to be the one running a game session, taking up the mantle of a Dungeon/Game Master, as it becomes quite daunting, even for players, when just the Player Manual is some 293 pages long. However, undaunted, I pressed through, as have many others willing to immerse themselves in this wonderful world. I rediscovered the Forgotten Realms and the land of Faerun. The wonderful and detailed illustrations present in the books fueled this process of rediscovery. 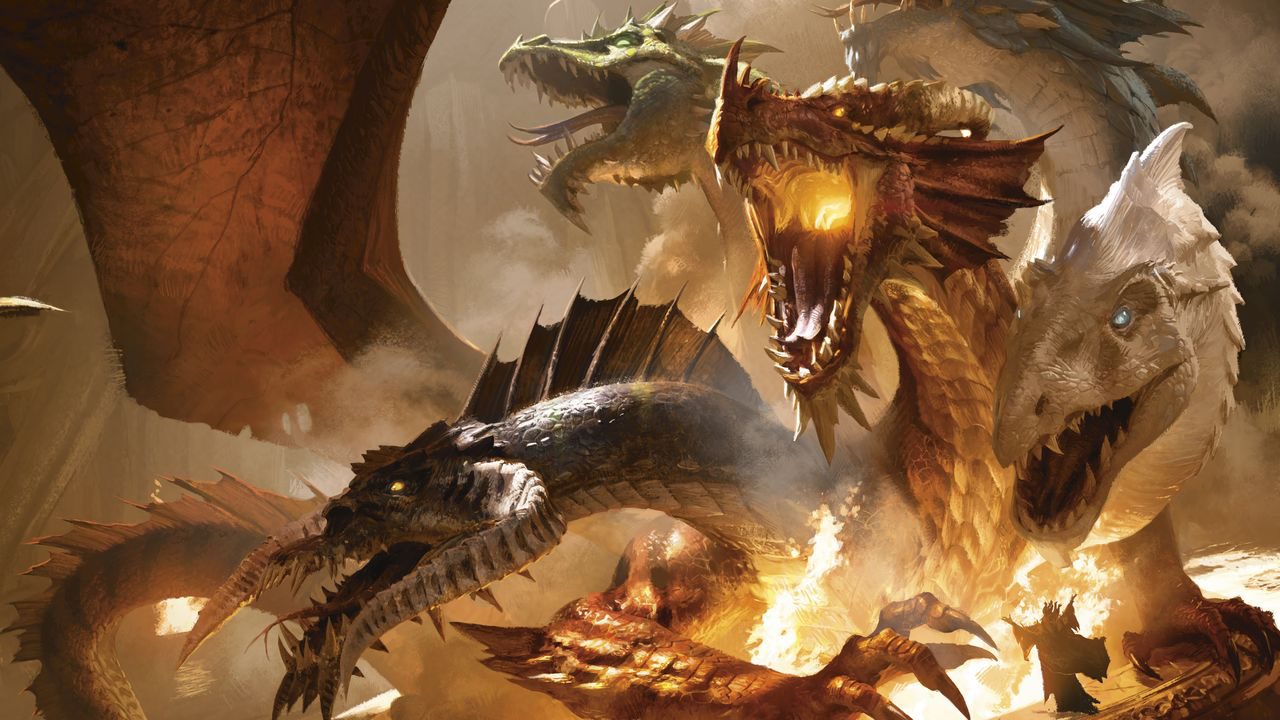 The evil five-headed Tiamat, Queen of the coloured dragons
The search for people to play with is in fact the toughest aspect of DnD. One of the core aspects of DnD is “if in doubt make up the rules!”. Initially, I had found this “homebrew” approach chaotic and unbecoming of an established game, however it is something I now follow. DnD is a game that can be co-opted in any manner a party pleases. It is a game that has grown and expanded over the years through its myriad editions. Most if not all RPG video games have some aspect of DnD game mechanics hidden. Most of 5E DnD source material is inspired by Anglo-Saxon, European and Slavic influences. The character options and location-settings are based primarily upon the Western World. The 4th Edition DnD did have some scarce source material for Indian weapons and armour but nothing more. I had assumed that a culturally rich region like India would feature in Dungeons and Dragons, especially when regions like Kara-Tur, Osse and Katashaka exist, inspired by Asian, Oceanic and Central African influences.

The planet of Abeir-Toril with myriad continents
This pursuit for Indian inspired content led me down another deep rabbit hole of Indian DnD groups, homebrew adventure modules and the overall state of Indian-themed video games. Groups like Panic Not! have contributed considerably to the Indian TTRPG sphere. Addressing the lack in Indian themes within the RPG sphere, the Aashiyana homebrew setting has been the stage for thousands of hours of gameplay among the Panic Not! community. A now deleted setting named Mahavedia, found in the annals of Reddit homebrew pages detailed ancient Indian influences for the 5th Edition DnD. However, any meaningful published Indian-themed content is very rare. In the video game industry, the Prince of Persia series, a much acclaimed and appreciated game created by Jordan Mechner, while being highly enjoyable, depicts bastardized aspects of appropriated Indo-Saracenic and Persian culture. It is only very recently that Raji: An Ancient Epic released, an indie game created by Avichal Singh, which is a story about siblings separated by a devious Asura who has plunged the land into war. Raji fully embraces its creator’s heritage, celebrating Indian storytelling and themes. It is now the recipient of many game awards. 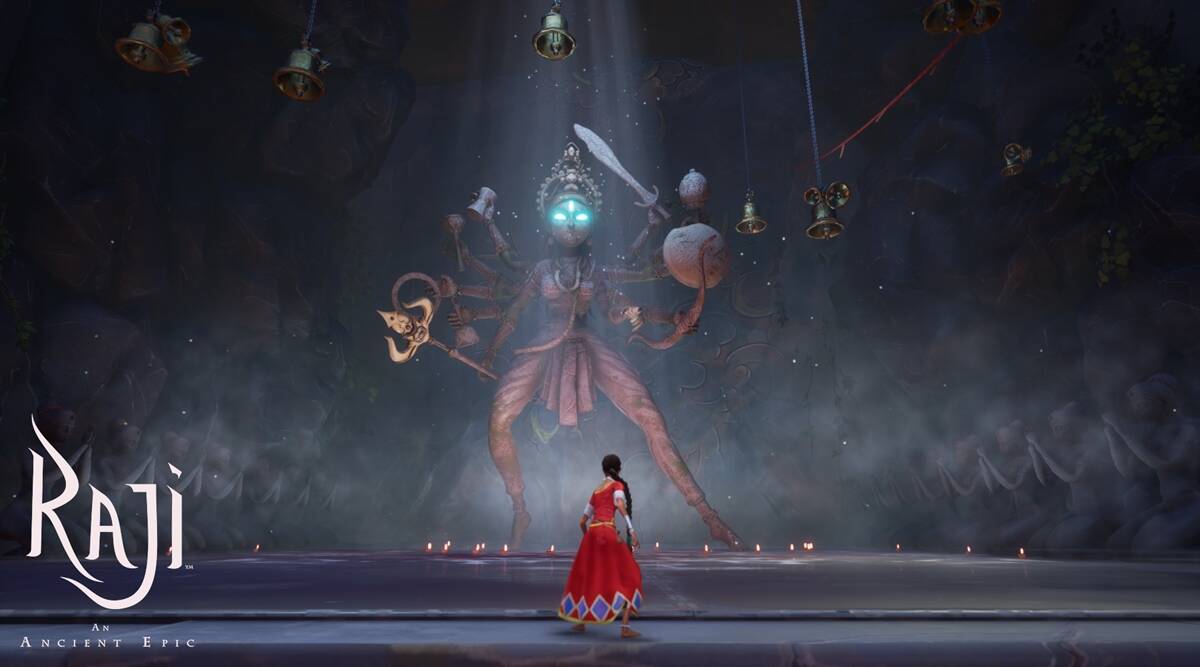 Raji an Ancient Epic by Nodding Head Games
My search for finding people to play with, the search for shared history in gameplay led me to understand just how nascent the field of gameplay storytelling in India is. While India does have a rich heritage in terms of literary history, Ancient Indian storytelling has always been through Shruti meaning “what is heard”. In this mode of information transfer, over time additions are made to verses, while other things are removed. In essence it is an incorporative and participatory process. A shared form of storytelling. Gameplay storytelling in India is neglected early-on and not nurtured. The active participation required creates a fertile bed for ideas and creative inspiration. I truly believe any medium of storytelling, be it visual media, interactive media, literature or auditory, has the power to bring people together. Storytelling should be celebrated and motivated.
While storytelling is essential for our survival as a species, Humans are motivated to construct narratives, because it affords meaning to our lives. It is a form of existential problem-solving, allowing us to believe that we have control over our lives. This is the reason why for millennia, humans have honed the art of storytelling. More than survival of the self, however, stories enable society to make meaning of the world around them. This is the reason the Egyptians worshiped the Sun as a god and Romans worshiped Jupiter, Venus and Pluto. People attributed thunder, a physical phenomenon, as a weapon wielded by not only Jupiter/Zeus but also Thor and Indra. These were Gods who travelled above us, looking upon us, granting us boons and curses. It is by quantizing the differences between the wilderness and humanity, can we as humans really understand ourselves. This is why we created mystical, mythical beings and creatures that symbolized chaos as an anathema to the order of our structured societies.
I sometimes quip now that a wizard, a paladin and a rogue walk into a tavern…the barkeep says “what is this? Some kind of joke?”
And as always, “Roll with Advantage, stranger!”