The Grandfather of Indian Animation

The year is 1957, a balding middle-aged man circles back to his birth-nation, India, armed with a mission, much like his missionary father. His mission is an animated one (quite literally). Charged with helping to set-up an animation division or “Cartoon Film Unit” as it was called then, for Films Division of India (FDI), Claire H Weeks made his way back to India as a part of the American Technical Co-operation Mission. 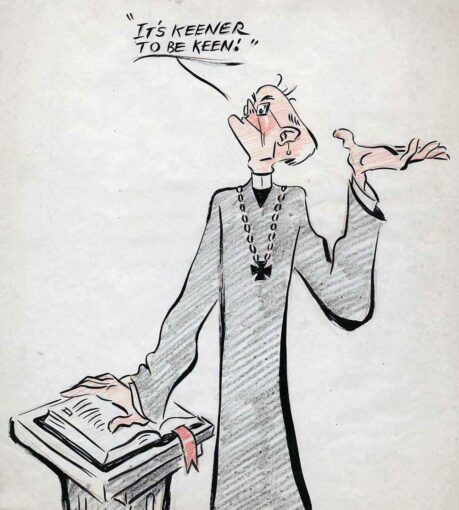 Claire caricature
(Courtesy : Weeks’ Personal Archive shared by his family with Animation Resource)
Weeks was born in Mysore, India (September 14,1911) to a Methodist Missionary. At 17, he relocated to America with his family. After he finished his education at Chouinard (on a scholarship), he got accepted into 2 week trial at Disney basis his portfolio. This was the time Disney was on a massive drive to scout artists.
His trial period completed he was put on probation (on $15 dollars for 6 months) training under Johnny Bond, George Goepper and George Drake. As he began to demonstrate his potential, he was moved from practising old scenes to production scenes.

Animal Studies by Weeks at Disney under the direction of Don Graham
(Courtesy : Weeks’ Personal Archive shared by his family with Animation Resource)
His career at Disney as a full fledged production artist formally started in 1936, on “Snow White”, as an Assistant for Jack Campbell, a junior animator assigned to Grim Natwick, who was working on the title character. His big break came after he was assigned to Milt Kahl (one of the Nine old men), to whom he attributed his entire learning of making a feature film - what made the characters come alive on screen. He was assigned to the story unit in Bambi and continued to assist Kahl throughout the production stage. 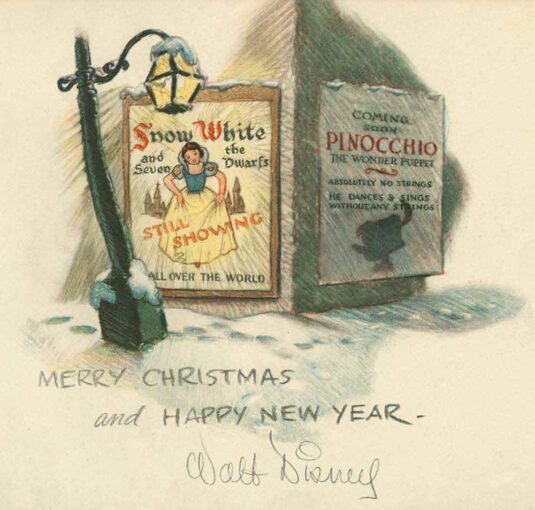 Christmas card from Disney,1938
(Courtesy : Weeks’ Personal Archive shared by his family with Animation Resource)
In an interview by Milt Gray, Clair Weeks recalls the Atmosphere of his first years at Disney “There was a great sense of sharing, and that’s one thing I’ve never forgotten about the studio in those early days. Nobody was selfish; everybody was willing to show whatever they had learned, people were generous, and secure…Jack Campell would sit there and show me, very carefully, how to get what he was getting into Snow White, and where I was getting a little off, he would spend hours with me–whatever time was necessary. Milt was the same way, he would analyze my drawings, and correct them and show me things, he wasn’t averse to that, because he wanted a good result, we all thought of the end product, and we were contributing to it.”
Despite a brief hiatus during World War II, Clair contributed to several animated feature films, including Peter Pan, Fantasia, Alice in Wonderland, Sleeping Beauty and Cinderella, earning his his first screen credit with “Peter Pan” as the animator for Tinkerbell. 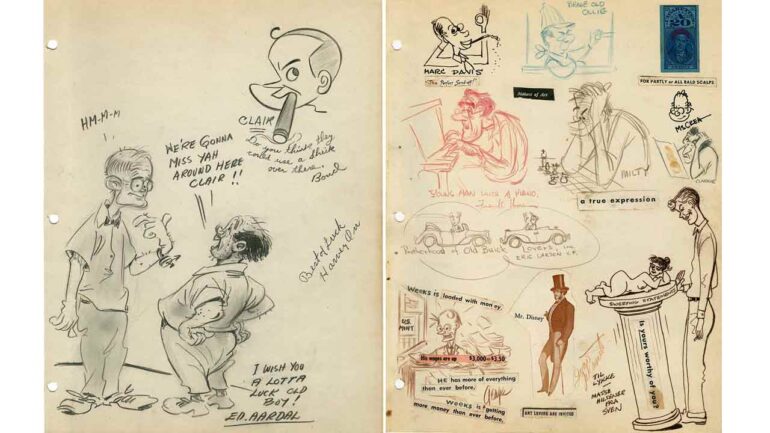 image from Clair Weeks’ Goodbye Book 1952, Disney
(Courtesy : Weeks’ Personal Archive shared by his family with Animation Resource)
Having served nearly 16 years at Disney, Weeks punched his tickets and then his sheets and parted on a mission to impart the very knowledge he had gained with the young minds enlisted at Films Division India (FDI), Bombay.
FDI was birthed post independence in 1948 with help from the Ministry of Information and Broadcasting as a studio to “articulate the energy of a newly independent nation”. The space, established in Mumbai (erstwhile Bombay) came equipped with cameras, recording and editing facilities and even preview theatres and was manned by trained film personnel. The films aimed to capture the socio-political and cultural realities of the country.

As the studio expanded from film to animated shorts to it’s first animated feature production - The Banyan Deer, Weeks was invited to help lay the foundations of a team to work on this feature.

Oft credited as the first Indian Animation feature length, it was indeed the first technicolor animation feature film to be developed in India (there were predecessors, other black and white animation films from previous decades like The Pea Brothers, Jambu Kaka , Superman’s Myth and Jumbo the fox) 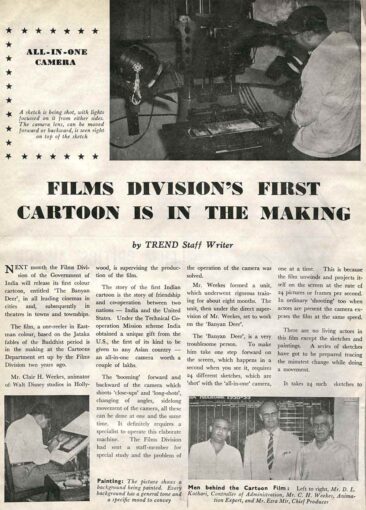 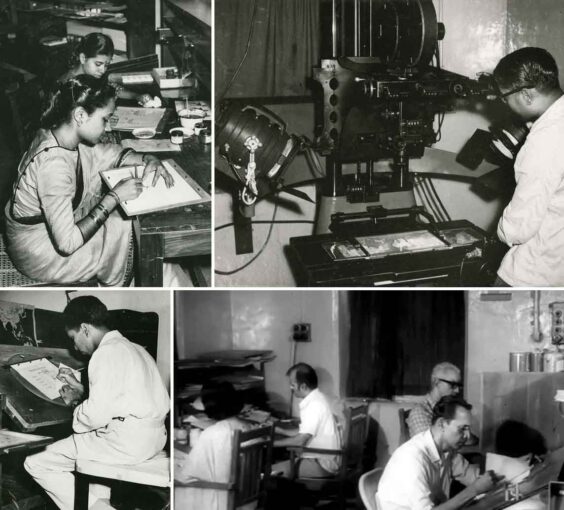 Banyan Tree - Production Stills
(Courtesy : Weeks’ Personal Archive shared by his family with Animation Resource)
Link to video - https://www.youtube.com/watch?v=MgkTwH5c_fY
Some of the biggest names of Indian animation like Ram Mohan, GK Gokhale were all part of the team that trained under Weeks, mastering the principles of traditional animation. Under his tutelage, of roughly 18 weeks, they learned the Disney master’s classical ways of animation. Weeks brought with him some of his work on Bambi, and the influence of this can be seen all too distinctly in the film. (Originally inspired from the Buddhist art found in the Ajanta - Ellora caves, the film does infact seem to carry the ghost of Bambi.) 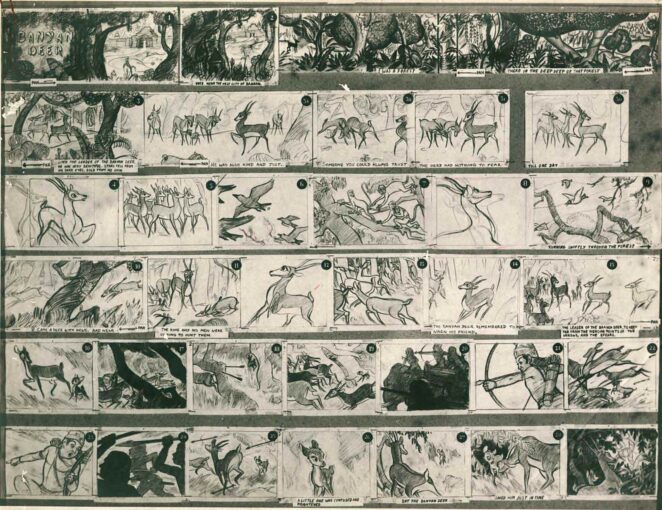 The Banyan Deer - Film Stills (Films Division India)
In an interview, Mr Ram Mohan, recalled how in a response to an ad by the Ministry of Broadcasting & Information seeking recruits for this new team, he had set out to meet Weeks just to show him his works (in cartooning) with no real intent of applying for a post. (he was a BSc graduate with no formal background in art and painting). However, Weeks, impressed with Mr Ram Mohan’s talent, snatched him up for the team and thus gave us all the man who would later be fondly recognised as “the godfather of Indian animation”.
Weeks’ mission didn’t quite end here. After this stint at Bombay, he went on to work with the US Agency for International Development, touring Southeast Asia for nearly a decade. He headed a communications office in Kathmandu, Nepal. His “missionary work” included making films and audio-visual programs that aided in the social development and economic growth of third world countries.
Weeks’ link to India did not weaken over time. He would set foot on Indian soil once again, this time at the request of National Institute of Design (NID), Ahmedabad, to teach young students in the medium. The animation department of NID was set up in the early 1970’s to train young professionals who then went on to train future generations. Weeks, alongside UK academic Roger Noake, came to the faculty to teach the students.
We reached out to one of his former students, veteran artist, filmmaker and educator, Nina Sabnani. Nina studied Art at MSU, Baroda, went on to join the Animation program at NID and since then has gone on to teach across disciplines (Animation to New- Media) at NID (1985-2207) and IDC, IIT Bombay (2007 - present).
In a short candid e-interview Nina shared with us her experience(s) with Weeks.
AG : What is your first memory/ impression of Clair Weeks? (any anecdote)
I had just joined NID after studying painting at the Fine Arts college in Baroda and though I had met Clair Weeks during my interview, my most enduring memory of him is from class.
It was our first day of class and in walks this very tall person in shorts and a Hawaiian floral shirt, a coke can in one hand and a football in the other which he bounces up and down while he introduces himself in hindi! That was our introduction to the first animation exercise ( the bouncing ball ) and the man who had also taught Ram Mohan. And now he was going to teach us!

He was a very informal person unlike any teacher of mine ever before. 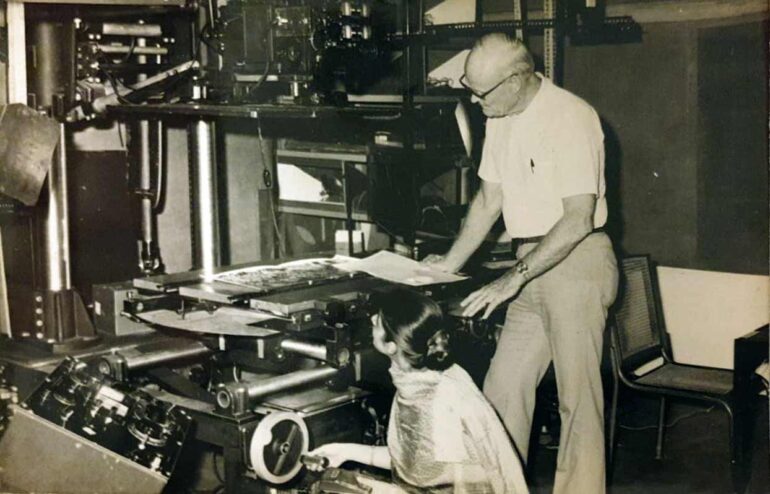 Nina & Weeks at the oxberry camera, 1980 (Courtesy: Nina Sabnani)
AG : What was studying under him like? What was the kind of curriculum and studio practise that you had back then?
He was very thorough and extremely kind and could spend hours explaining something we didn’t understand. We got a lot of exposure under him - he had artworks from the Disney Studios that he would show us and a plethora of films from his collection. He also invited P K Nair from FTII to show us animation films from their huge archives.

There was no fixed curriculum that we received or even a time table. We would arrive every morning to some assignment or film discussion. He set us a project The Silver Elephant through which we learnt all the aspects of film making and action analysis. He introduced us to the Disney way of doing scripts, storyboards, and animation. He was keen to have us actually make the whole film as a team and pitch it to the Children's film society India. 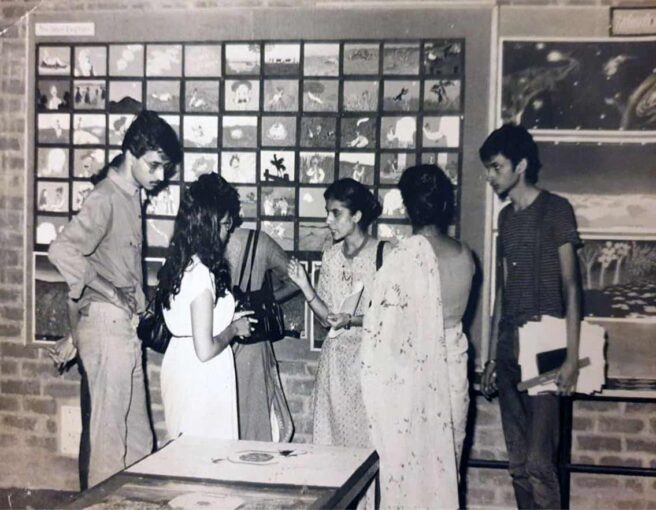 Prasoon Pandey (extreme left), Nina (center) Orijit Sen (extreme right) at the presentation of the storyboard for The Silver Elephant (Courtesy: Nina Sabnani)
AG : Who do you prefer CW the educator or CW the Filmmaker ?
Definitely the educator since he shaped our learning. We did not get to see his films actually!
Nina met him a decade later at his home and recalls the visit with fondness, Weeks was preparing for a show with all his drawings, at a gallery near him. He passed a few years later (August 1996).

Weeks’ letter to Nina (left) Nina & Weeks at his home, L.A, USA, 1990
Though Weeks brought with him the classical ways of the west, he fired up the minds of artists and students who then went on to push the boundaries of the medium and create seminal works. The legacy of Indian Animation is closely tied to the legacy of Clair Weeks. He was instrumental in shaping the future of the animation “scene” in India, training and inspiring the breed of future animators and educators, who in turn paved the way for coming generations.
We raise our pegs to pay homage to this home- grown legend with an illustrious life and career.
(a special thanks Ms Sabnani for sharing the archives)
Resources
Worth, S (2018, November 21), Animation History: Clair Weeks- Pioneer of Indian Animation, Animation Resources
Available at: https://animationresources.org/history-clair-weeks-pioneer-of-indian-animation-2/
Bendazzi, Giannnalberto (2015) Animation: A World History: Volume II: The Birth of a Style - The Three Markets
Dey, Sohini (2018, April 17) When India Made Its First Major Animation Movie With a Little Help From a Disney Expert
Available at:https://www.thebetterindia.com/96334/india-first-animation-movie-the-banyan-deer/