Sugandha Bansal's heart warming short film A little More Blue is inspired from a true story that she came across while researching about the LGBTQ community.

Tell us about your journey?
I loved reading books and drawing as a kid, but more than that I loved telling stories, be it in the form of narration, poetry or drawings. But the society pressure made me take up Science stream in my high school and I ended up topping my state in 12th board exams, and got calls from top engineering colleges. However, most of my life decisions have been based on the idea that if doing that thing will make me happy, and I knew creating art was something that made me really happy.
Animation just seemed like the right thing to do as it combined my love for drawing and storytelling. I did my bachelors in Illustration and Animation for Cambridge School of Art, UK; and still felt a need to dive deeper and explore my skills in animation, and so I pursued Masters in Animation Design from MITID. College gave me the right environment to try out new ideas without any fear, and believe in myself and my work.
What was the reason for making this film?
‘A Little More Blue’ started with a very short course in college in which I had to write a narrative story or poem. I don’t really write, but that course gave me a chance to try my hand at it, and I wrote a poem inspired from a true story that I came across while researching about the LGBTQ community. It was the story of Gazal Dhaliwal, and it was really different from all the other stories I came across, as her parents were so supportive in her journey of changing her sexual identity, as is not the case with most of the trans people. It was heart-warming. A Little More Blue is the story of a girl, trapped inside the body of a boy. Since childhood she knew she was a girl, and she knew someday she will have to break off her shackles and tell the truth to everyone, but until that day; she struggled between having the body of a boy and soul of a girl.

I strongly believe that since I have the skills and resources to share stories, they should be stories with some sort of message, stories that people can relate to.

I also really need to believe in the story that I am telling, as I will be working on it for a long period of time while making the film, and this was a story that had stuck with me for a long time, so I decided to make a film on the poem I had initially written. 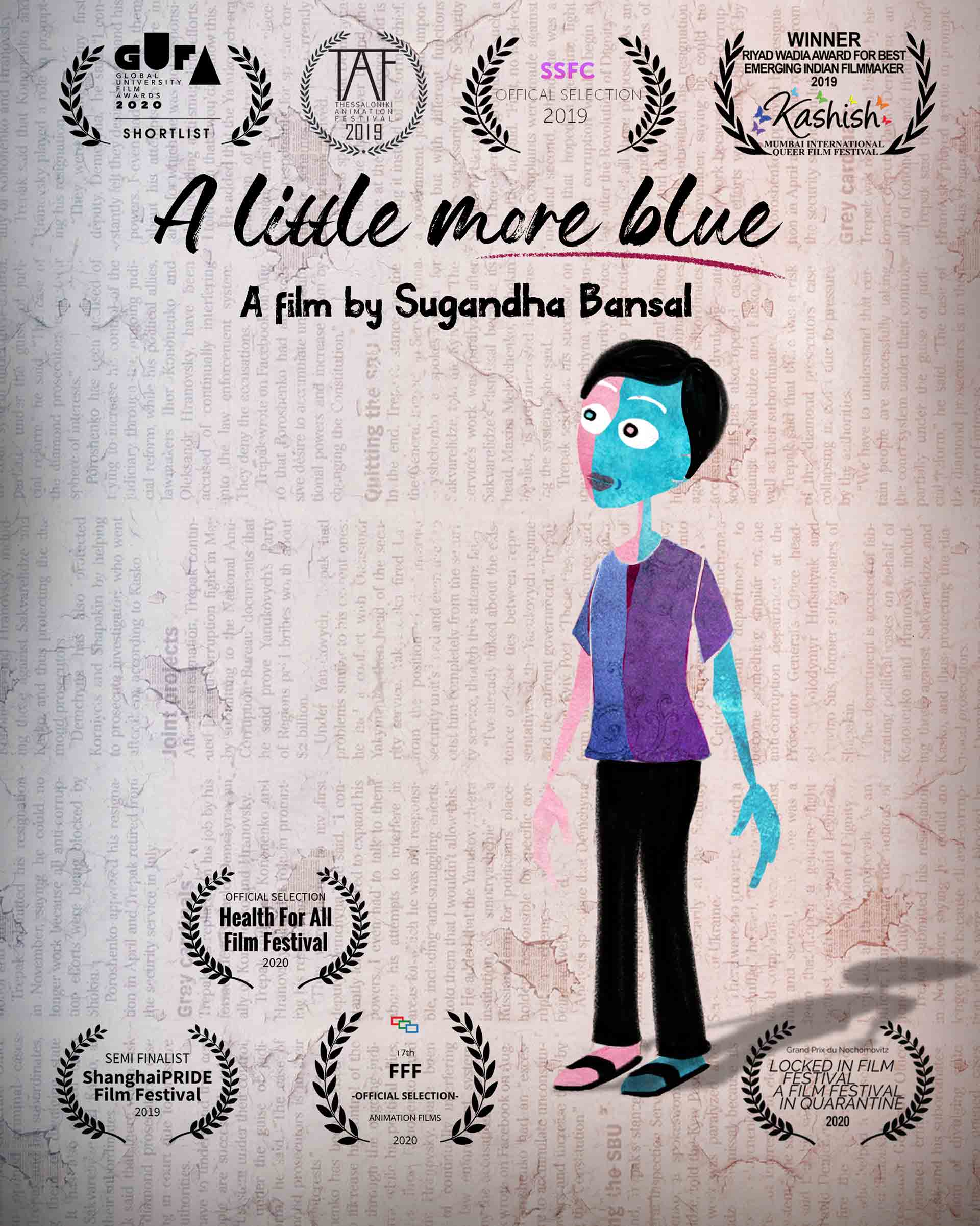 Why did you choose this medium for expressing yourself?
I used 2d hand drawn animation for my film, because I am really fascinate by it. I think there’s just so much you can do with it, such fluidity and and I personally feels like it has more soul and rawness to it.
I was also very inspired by Isabel Herguera’s work, and wanted to use a lot of textures to convey different feelings in the film. 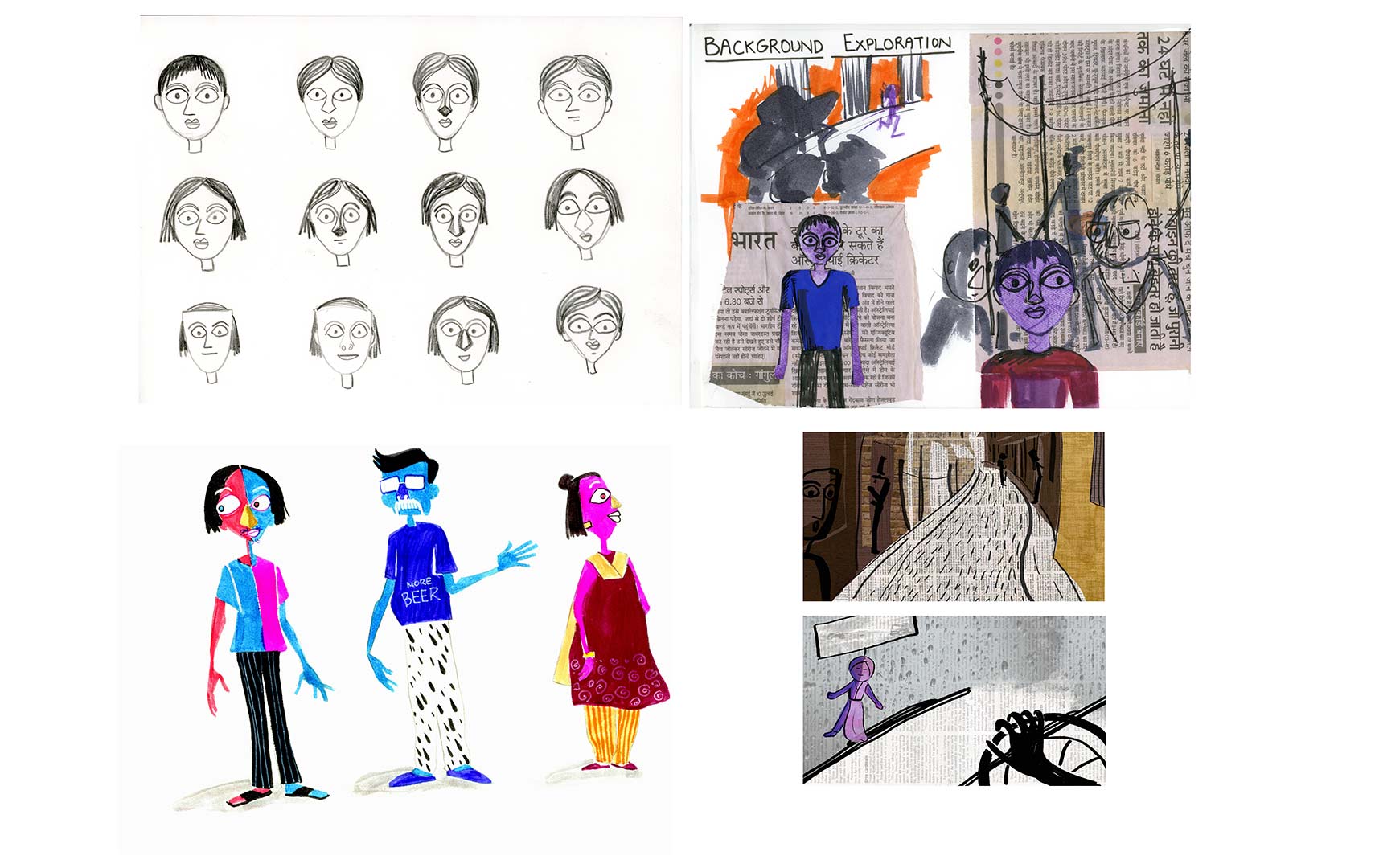 Tell us about the process?
The process of my film was pretty organic. Although I made a storyboard and animatic and had a script, I still didn’t know the ending of my film when I started production. I guess it is one of the perks of making an independent film, you decide your own process, it could have been a hit or miss though. It was during mid-production I realized how I wanted my film to end. 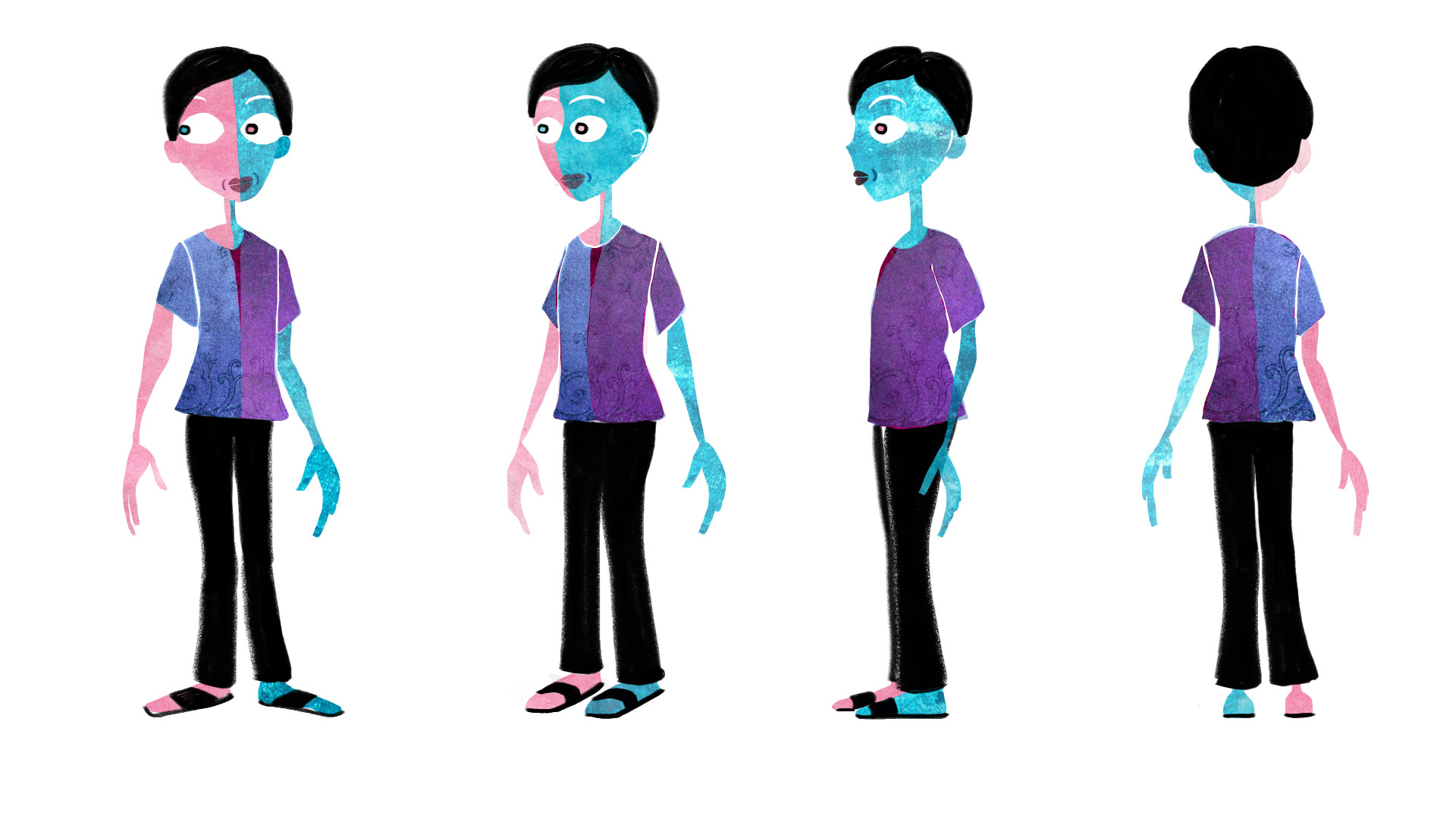 Tell us about the challenges and highs of making the film?
I had a strong visual language set for my film, and figuring out different ways to how I can animate it in time, keeping the visual language intact was a challenge. It took me a few hit and trials to finally figure out the process initially. However, when that was fixed, the process was smooth. I think the high for me was figuring out the end of my film, and seeing it all working together. It was exciting!
Any important learnings?
I think having a deadline for the film, really pushed me to work harder and finish the film in time. I made this 4 min short in 3 months, and I do believe that it wouldn’t have been possible if I didn’t push myself to finish the film in time. When you’re working independently on a film, it is also easy to lose motivation to finish it sometimes, as making a film is a long process, hence setting up small deadlines really helps. 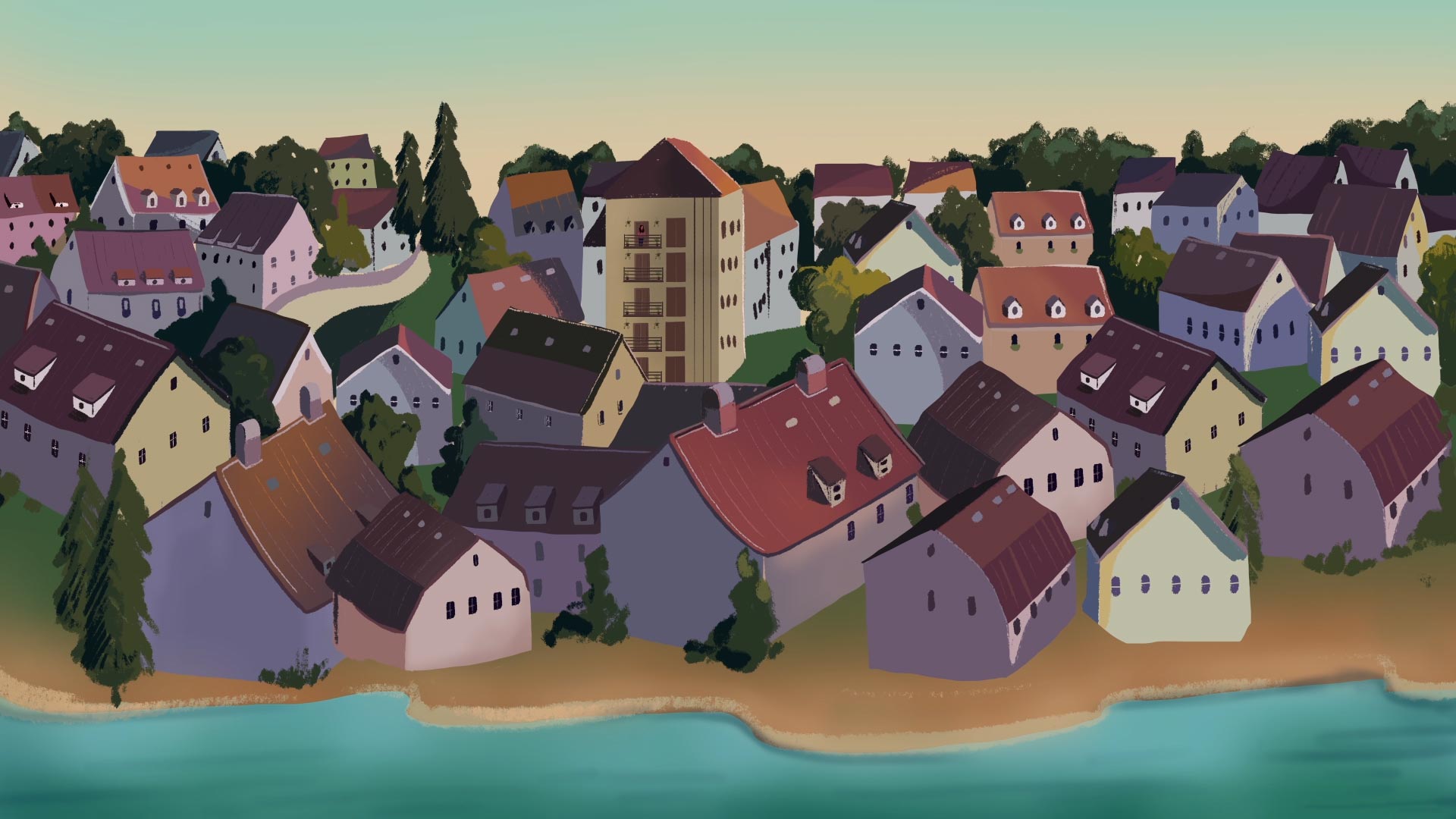 How was the film’s reception?
I honestly did not expect my film to go to any festivals or win. I think I still undersell my work. Hence for me the way the film was received has been overwhelming. It won Riya Wadia Emerging Filmmaker’s award at KASHISH Film Festival, Mumbai. The film also went to Iran and took me along with it, where it was a runner up at Simorgh International Festival, Tehran. Some other official selections are Health for All Film Festival, Geneva; Global University Film Awards, Hong Kong, TASI Anifest Viewer’s Choice Finalist. I recently released the film for public viewing, and the response from people has been heart-warming.
Whats next?
I worked at Post Office studios for some time after graduating, and have just started freelancing now. Freelancing is giving me more control on the kind of work I want to do. I also cannot wait to start working on a new film, because I know the happiness making your own film gives you and the rollercoaster of emotions it takes you through; I really want to feel all of that again. 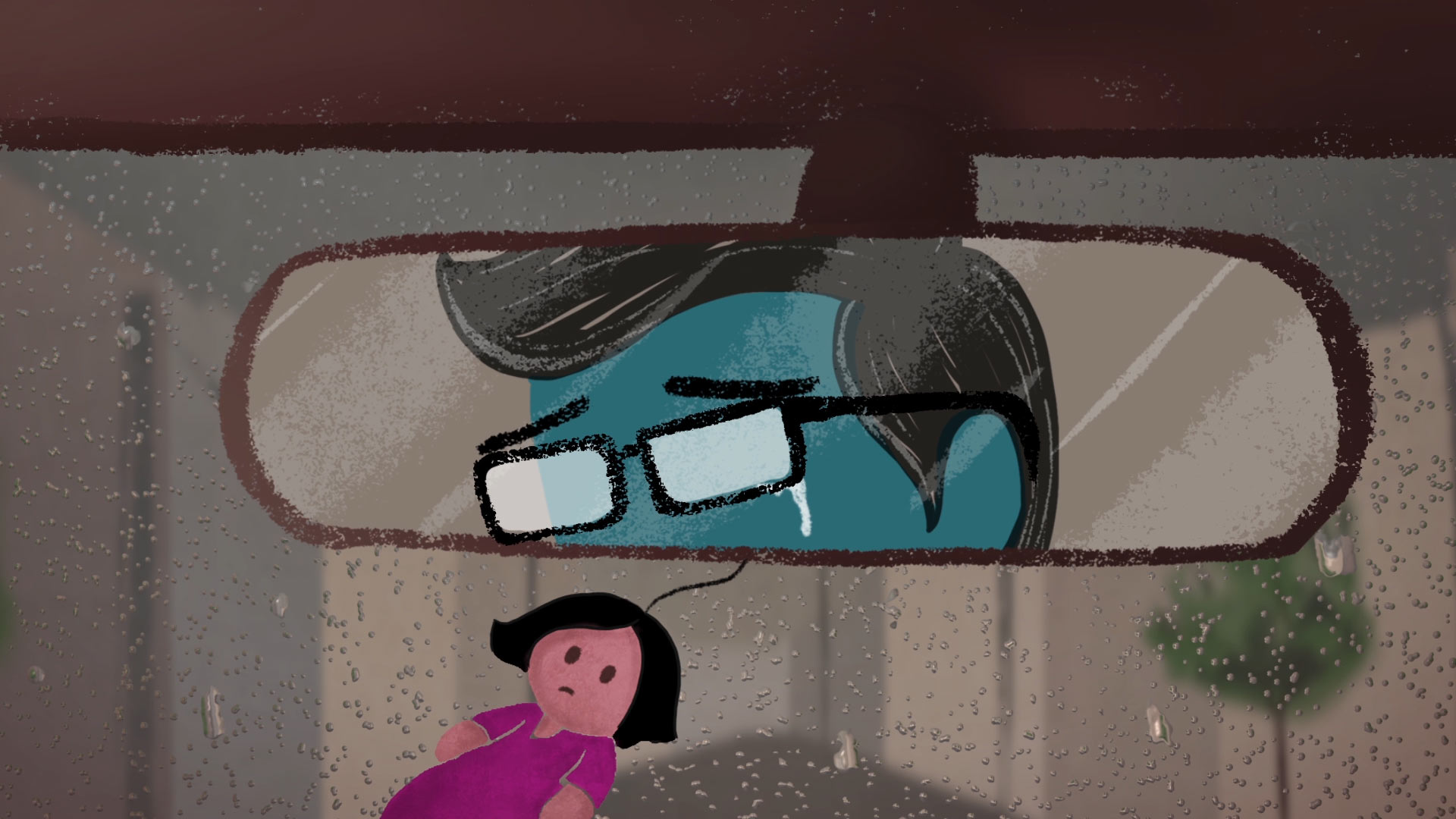 Parting thoughts on the Indian animation scene, gender identities?
No doubt that there is a dearth of adult animation in India and animation is still widely considered to be cartoons made for children. I want to continue making films and contribute to the adult animation industry in India.
Many a times, some individuals do not identify with the gender that has been assigned to their biological sex. Such people may feel neglected and unaccepted by the society, and it also takes a toll on their mental health. Through ‘A Little More Blue’, I would like to create awareness amongst the society so that it accepts alternate sexualities, and also amongst the people who are having a problem in identifying with their gender, to comfort them by letting them know that they aren't alone in this. 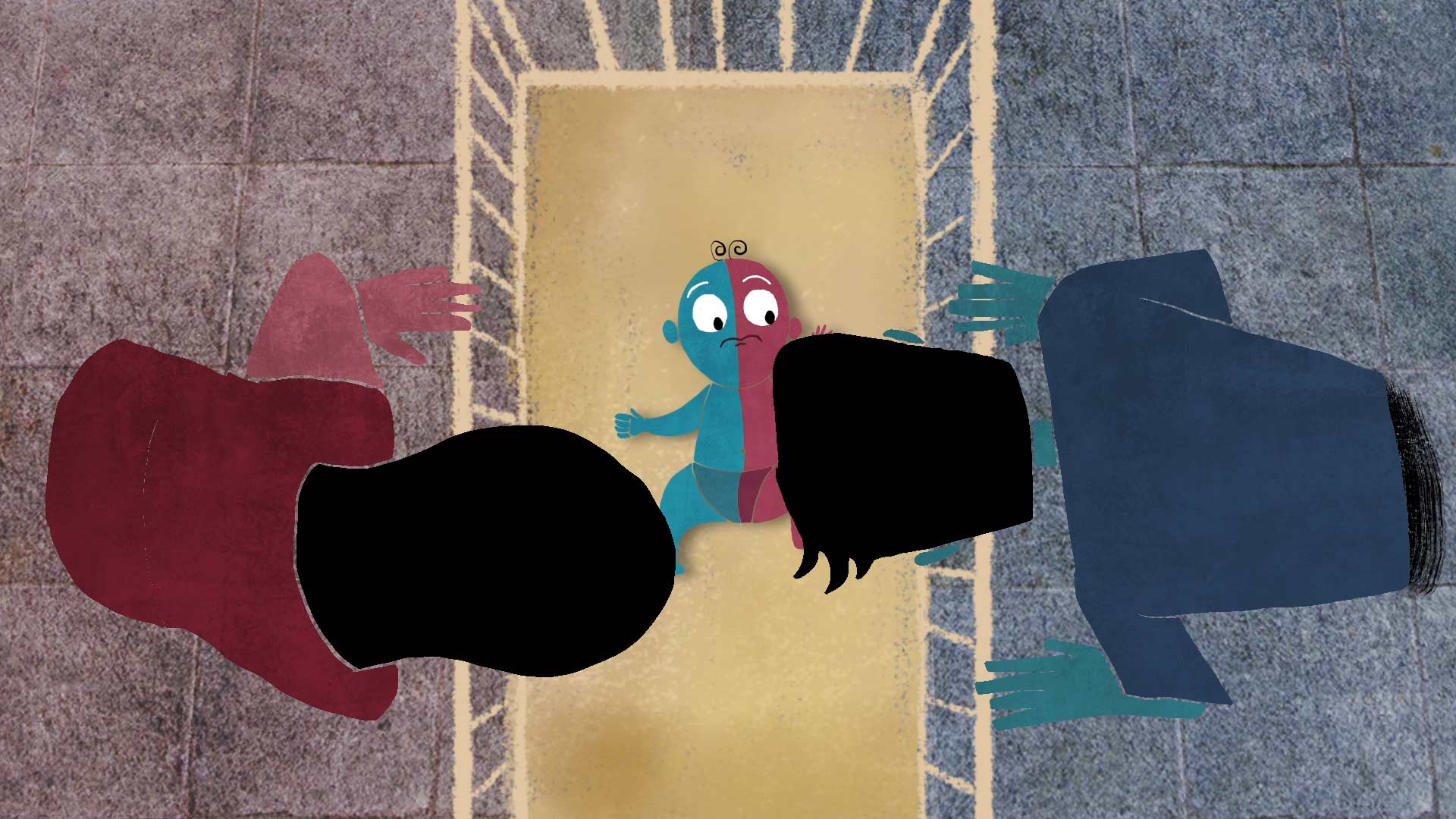 Your favourite LGBTQ:
Indian designers: Sridhar Rangayan(He is not from the community, but someone who makes art about the community, and is working towards it. Also runs KASHISH film festival)
Animation Films: Maacher Jhol
Characters: Gazal Dhaliwal
Activists: Gautam Bhan
Platforms for discussion: GAYSI family
We hope to see more insightful communication pieces from Sugandha in the near future and wish her the very best. You can follow her on instagram here

An Unreal experience ! Film baanate waqt nahi socha tha ke dusre desh mei ja k award lenge ? A big big thank you and shoutout to everyone who was a part of ‘A Little More Blue’. You all made the film possible ❤️