Animation’s dichotomy of nostalgia and ambition

Understanding Animation represents the first tentative steps to introduce aesthetic and cinematic value of animation to students of animation, and to provide some models by which they may address a highly complex form exemplified in numerous ways by hundreds of animators worldwide. Understanding Animation is, therefore, part history and part theoretical speculation.
The animation film industry, in a modern context, is truly an indispensable part of the global film and video industry worth $235 Billion or ₹17.9 Lakh Crore. Most modern films, it seems, cannot do without some form of Computer Graphics aided enhancement. Indeed, taking Marvel films as an illustrative example, they have entire sequences that are recreated with CGI. However, when one speaks of the animation film industry, VFX and CGI isn’t the first thing that comes to mind. Historically speaking, though, this industry has been referred to by hand drawn imagery and, only recently, 3D computer animation.
There is, however, a pervasive idea, globally, that animation or animated films generally are a domain relegated for children. Even in Japan, where the animation industry is so strong it is known world over by their own genre: Anime & Manga, otakus (a person having an intense or obsessive interest especially in the fields of anime and manga) are generally looked down upon. No grown-up, self-respecting person should dedicate their time to fanciful, children’s amusement. Within India, the animation industry is plagued with dismissal from the audience as slap-stick or solely “for children”.
Before animation became synonymous with entertainment, it was often used as a tool for propaganda. Prior to the rise and popularity of animated features, aided by the legendary Walt Disney, caricatures and cartoons were often printed in magazines and newspapers. It is true that a picture speaks a thousand words. In India, the ever popular ‘You Said It’, a caricatured representation of the common man drawn by R.K. Laxman, would present politics garbed in humour. One would be hard-pressed to argue that these were for children. It is generally recognized that the power of caricatures and humour are far more effective in disseminating propaganda than merely presenting it to an audience. During the World War II, the Looney Tunes show, presented on American television, depicted the Axis powers in various stages of tomfoolery. The content, while decidedly aimed at imprinting upon children how the enemy is no match for the superior American forces, had serious social impact. It kept up the morale of the general public, even that of adults. 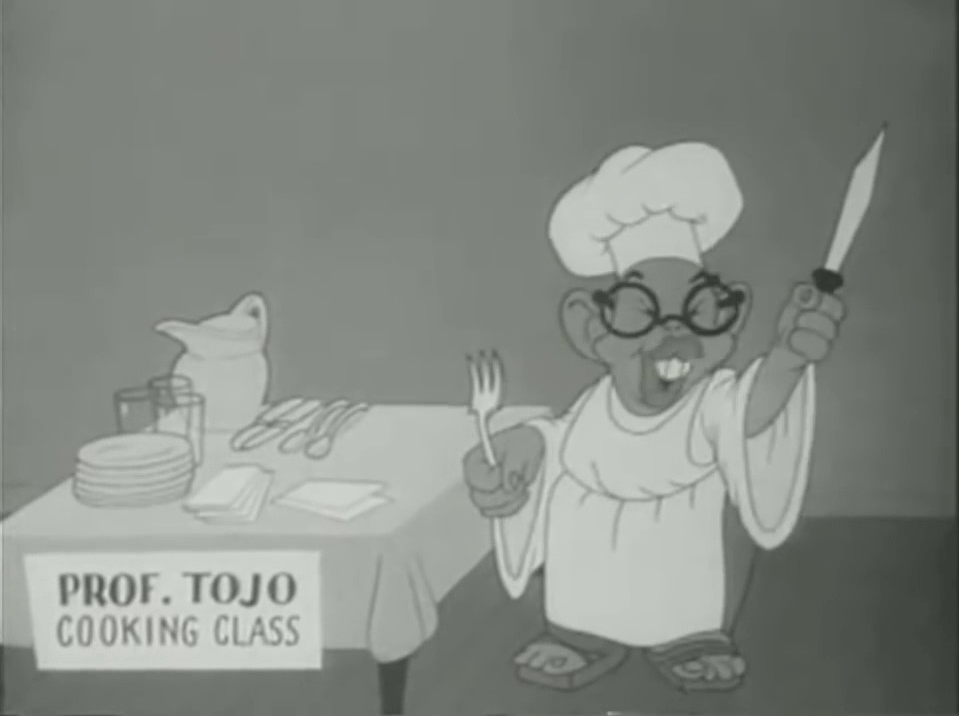 A Japanese chef showing how to make a Japanese Club Sandwich using paper- Tokio Jokio, Looney Tunes, 1943
How is it that a medium that could handle with ease such serious topics, came to be viewed as “for children only”? The question must be asked as to why audiences move away from animation, as a viewing preference, over to live-action as they age. A partial answer may be found in the strengths of animation as a medium. It is generally impossible to realistically film a coyote reading manuals and scheming only to fail at capturing an eponymous Road-Runner bird. Animation’s strength lies in being able to depict the impossible. It shows the unrealistic and fanciful; a what-if. As a person ages they are unceremoniously dragged to the real world with all its responsibilities. This is by no means a statement of fact, however, but people are generally attracted to content that reflect their lives. Psychologically speaking, humans get acutely aware of their own mortality as they get older. Wishful thinking takes a back seat.
Arguing the other side, why then do people enjoy watching the latest blockbuster superhero films? Far be it from a scheming coyote, it is equally as implausible for an alien to come to Earth, live among people and later find out he can fly and shoot laser out of his eyes. Why is this then a successful multi-billion dollar live-action film franchise and accepted among adults? The question arises as to how a comic book company successfully ventured into live-action film-making and has produced among the biggest grossing films of all time.
Animation is caught between a dichotomy of its nostalgia and desire. As mentioned earlier, Computer Generated Imagery, as used for Steven Spielberg’s Jurassic Park, The Lord of the Rings trilogy and James Cameron’s Avatar, are all forms of animation. The difference lies in treatment alone. They have all utilized the principles of animation in their films. The character of Gollum in the LotR trilogy has exaggerated features with different proportions than that of a human. Similarly, the same can be said of the Na’vi people in the Avatar. Traditional animation is not under threat from Live-action media, just as vinyl disc sales are continuously rising amidst digital music. But the question yet remains as to why live-action/realistic CGI is preferred over traditional animation. This raises a curious question about the uncanny valley. 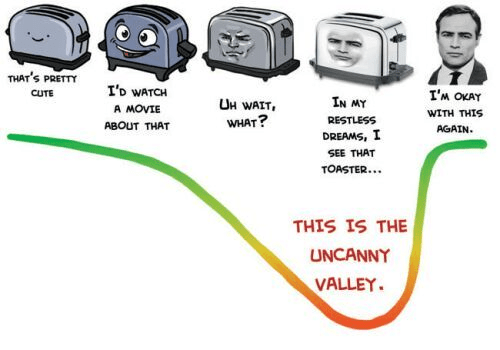 The uncanny valley is a psychological phenomenon in which a human being experiences a negative emotional response to a non-human figure, object, or entity that possesses a human likeness. The underlying idea is that humans are comfortable with other human-like objects or entities up until a certain point. Once the object or entity looks too human despite its artificialness, it suddenly becomes “uncanny” and takes on a disturbing level of eeriness to the viewer. The character would elicit less of a negative response from humans if animators or developers were to dim or exaggerate its anthropomorphic features. 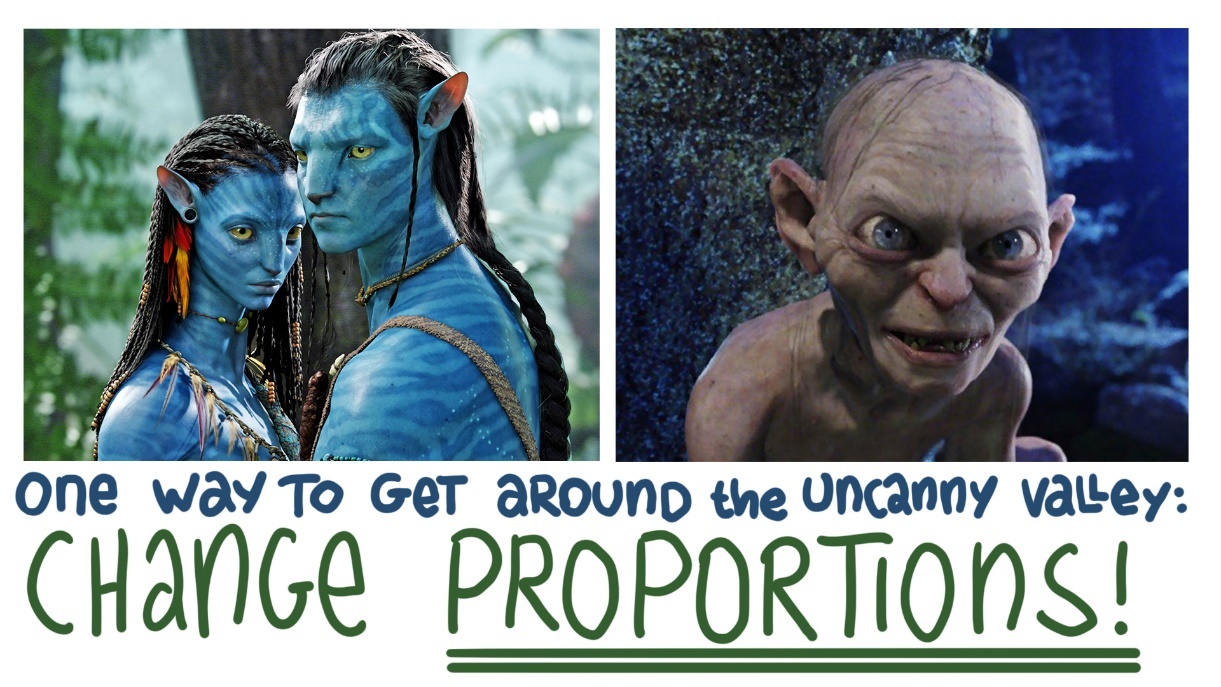 Given below is an example of how the uncanny valley phenomenon affects our perceptions.

Where the emoji is agreeably cute and to a degree mildly annoying, the realistic version is nightmarish.
Traditional animation is illustrative, whereas live-action is realistic. The word illustration, one which is closely associated with the industry, originates from the Latin illustrare, to illuminate or shine light upon. The etymology suggests a sense of gleaning or comprehension. Art is always an illustrative representation of the real. It illustrates or gives a broad reference. An illustration of something signifies an example or approximate copy of the original. In a broad sense, it is this perception of animation being a copy or an illustration of the real where the issue lies. In an attempt to make animated characters more agreeable and not fall victim to the uncanny valley, animation studios often make their characters cute. It is after all a business; if the audience hates the character, the movie doesn’t sell. Pixar, infamously, is often given flak for making its female characters look the same with rounded eyes and rounded face. 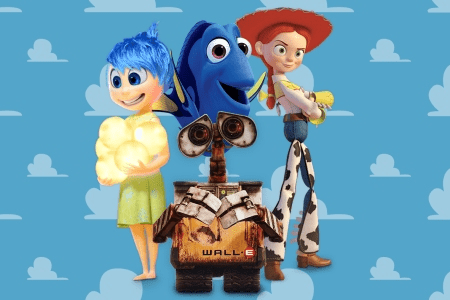 This, however, extends even to non-human characters such as Nemo, Lightning McQueen, Remy the rat, Mike Wazowski among others. The rounded face elicits a primal protective response in humans. The large eyes in proportion to the face and less-defined face makes the characters look childlike irrespective of actual age. In the film Monsters Inc. the monsters themselves appear rather likeable whereas Boo appears slightly uncanny. 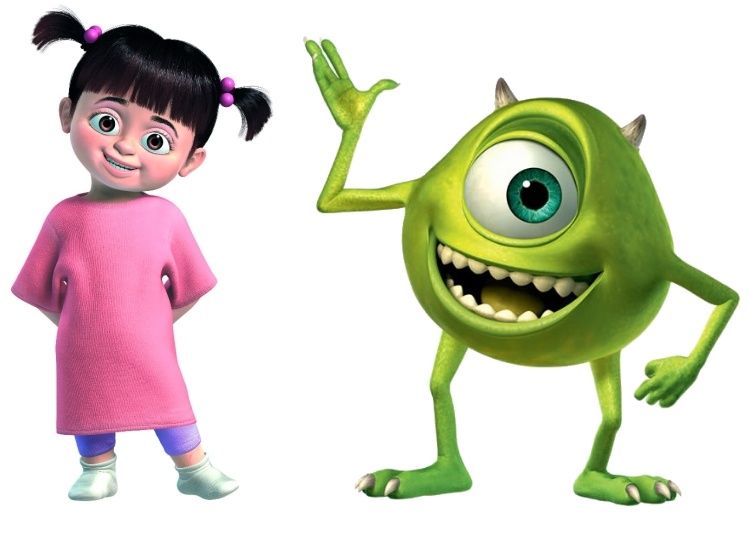 During Shrek’s early test screenings, the audience elicited anxiety in response to seeing Princess Fiona. She was too lifelike, causing kids to feel unnerved and even frightened, many crying whenever she appeared onscreen. Based on this feedback, the animators edited her appearance to give her a more cartoon-like appearance in order to prevent the uncanny valley effect. This primal psychological association with proportions is often misplaced with the content itself being childlike. One must remember that the CGI present in live-action films is also classified as animation but they have no such aspersions cast upon it.
Pixar’s films, though aimed at children, deal with many mature themes such as loss, sacrifice and betrayal. It is therefore a testament to the artists and storytelling for being able to create films for both adults and children. This is more commendable than live-action as it takes a subtle understanding of the craft for the content to appeal to all generations. This is even true of Tom and Jerry, Looney Tunes and Dexter’s Laboratory among the other old animated cartoons, where one can find hidden and more mature jokes. One of the later principles of Walt Disney’s studio was creating content for families. In his extensive Disney history, Tinker Belles and Evil Queens, Sean Griffin describes Disney's transformation from a churner of slapstick, often raunchy, cartoon shorts to a producer of values-oriented animated features as it chased after box-office success. This would signify that the industry did, at one time, produce content for adults but the market directed it towards being more family oriented.
To summarize, though traditional animation in India, and indeed the world, finds itself caught between a strange vice of human psyche, nostalgia and envy for its realistic counterpart CGI, its greatest strength lies in its ability to create for all ages. It need not view the perception of it being “for children” as a curse but as a secret weapon instead. It should own the fact that it can create and tell any story for all demographics. There is much to learn from the already established animation industries across the world. If it takes a page out of classical animation as it appeared in the 1940’s American television, it may well be able to bury deeper meaning for the older audience in its content while still appealing to children. It need not compete with live-action to create content solely for viewership among the older audience. What it may need is to structure content that appeals to all demographics. This is definitely not easy but well within the capabilities of animation as a medium. The animation industry in India is yet young and would require understanding of the craft, human psyche and more importantly the respect given to live-action content for it to mature and become an industry in earnest.
The opinions and thoughts expressed in the article are subjective and reflect only the author’s views.